On April 8 2013 Margaret Thatcher’s son and daughter announced the death of their mother, the only woman who has been elected up to date Prime Minister of Britain. Every major newspaper went out inmediatly with obituaries, analysis, opinions, editorials and comments on the political and human story of the longest serving UK leader in the 20th century: 11 years and a half, from May 1979 to November 1990. I have chosen from the New York Times five of the many pieces the paper published on the news, starting with Kissinger’s testimony. (Click on each headline to watch the interviews and photos or to read the other pieces) 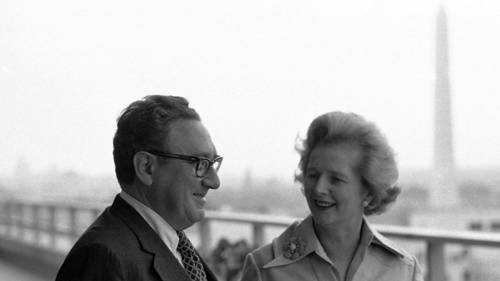 Former Secretary of State Henry A. Kissinger says  in this video interview with New York Times’s David Gillen, taped on April 8 2013, that  Margaret Thatcher’s unwavering style as British prime minister defined leadership in a time of hesitation and indecision. Related article: ‘Iron Lady’ Who Set Britain on a New Course

Memorable speeches from Mrs. Thatcher’s 1979 victory, the end of the Falklands war and her fight against European integration.

Margaret Thatcher: Her Journey From Aspiring Politician to World Leader

Before she married Denis Thatcher, the future prime minister was Margaret Roberts