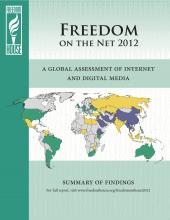 This report is the third in a series of comprehensive studies of internet freedom around the globe and covers developments in 47 countries that occurred between January 2011 and May 2012. Over 50 researchers, nearly all based in the countries they analyzed, contributed to the project by researching laws and practices relevant to the internet, testing the accessibility of select websites, and interviewing a wide range of sources.

This year’s findings indicate that restrictions on internet freedom in many countries have continued to grow, though the methods of control are slowly evolving, becoming more sophisticated and less visible. Brutal attacks against bloggers, politically motivated surveillance, proactive manipulation of web content, and restrictive laws regulating speech online are among the diverse threats to internet freedom emerging over the past two years. Nevertheless, several notable victories have also occurred as a result of greater activism by civil society, technology companies, and independent courts, illustrating that efforts to advance internet freedom can yield results.

Release Materials for Freedom on the Net 2012:

Many of the countries examined in this edition of Freedom on the Net can be divided into three categories:

1. Blockers: In this set of countries, the government has decided to block a large number of politically relevant websites, often imposing complete blocks on certain social-media platforms. The state has also invested significant resources in technical capacity and manpower to identify content for blocking. Among the countries that fall into this category are Bahrain, China, Ethiopia, Iran, Saudi Arabia, Vietnam, Syria, Thailand, and Uzbekistan. Although most of these governments employ a range of other tactics to curb internet freedom—including imposing pressure on bloggers and internet service providers, hiring pro-government commentators, and arresting users who post comments that are critical of the authorities—they use blocking and filtering as a key tool for limiting free expression. Over the past year, governments in this group have continued to refine their censorship apparatus and devoted greater energy to frustrating user attempts to circumvent the official blocking.

2. Nonblockers: In this category, the government has not yet started to systematically block politically relevant websites, though the authorities may have demonstrated interest in restricting online content, particularly after witnessing the role online tools can play in upending the political status quo. Most often, these governments seek the appearance that their country has a free internet, and prefer to employ less visible or less traceable censorship tactics, such as behind-the-scenes pressure from government agents to delete content, or anonymous  cyberattacks against influential news sites at politically opportune times. These states also tend  to have a harsh legal framework surrounding free speech, and in recent years have arrested individuals who posted online information that is critical of the government. Among the countries that fall into this category are Azerbaijan, Egypt, Jordan, Malaysia, Venezuela, and Zimbabwe.

3. Nascent blockers: These countries—including Belarus, Sri Lanka, Pakistan, and Russia— appear to be at a crossroads. They have started imposing politically motivated blocks, but the system has not yet been institutionalized, and it is often sporadic. For example, in Russia, the government officially blocks material deemed to promote “extremism,” but due to the vague definition of extremism, political websites are occasionally blocked as well. In addition, regional courts in Russia have at times ordered the blocking of websites that unveil local corruption or challenge local authorities. Other countries in this group, such as Pakistan, have seriously considered instituting nationwide filtering, but have not yet implemented it, thus not fully crossing into the first category.