Edward Tenner’s analysis for The New York Times of the South Korean ferry Sewol sanking Wednesday, April 18, is an excellent overview of the institutional failures, technical deficiencies and human errors behind some of the worst disasters in the last century.

Tenner’s advise can save many lives. It is a useful guide to take into account by anyone with responsibilities in crisis management. 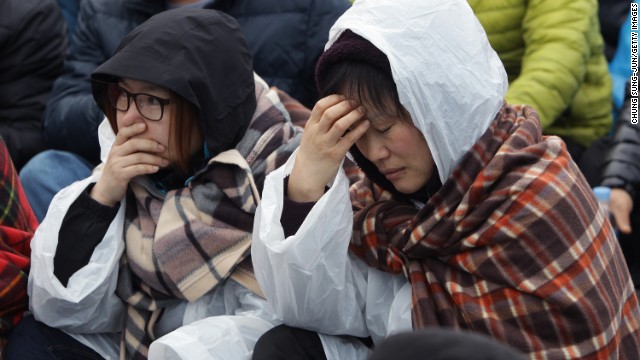 Relatives of missing passengers from the Sewol ferry grieve on Sunday, April 20, in Jindo, South Korea. Dozens of people have died and hundreds are missing after the ferry sank on Wednesday, April 16, as it was headed to the resort island of Jeju from the port of Incheon. CNN (LINK TO MORE PHOTOS)

PLAINSBORO, N.J. — With hope fading for the rescue of 271 passengers, most of them high school students, who remain missing after the South Korean ferry Sewol capsized and sank Wednesday, it is not too early to draw lessons from the disaster. South Korea’s early response was to point to “human error” and seek the arrest of the ferry’s captain, first mate and another crew member. But it’s worth keeping three points in mind as investigations proceed.

First, few great disasters have one single explanation. In some cases imagination fills in an incomplete story. The Great Chicago Fire of 1871 almost certainly wasn’t started by Mrs. O’Leary’s cow overturning a lantern. Folklore scholars have a word — sharpening — for the addition of detail after original information is lost. And the spark is often beside the point. Catastrophic loss of life and property usually signals a fateful conjunction of unlikely circumstances, none of which might have been fatal in itself. If Chicago hadn’t been a boomtown built mainly of wood; if there hadn’t been a prolonged drought; if the air had been calm instead of windy — etc., etc., etc.

This principle applies, too, in most of the great peacetime shipwrecks. Consider the Titanic. The flat sea and atmospheric conditions prevented lookouts from recognizing the iceberg before it was too late. The scraping of sea ice against the hull led to a failure of riveted plates. There were problems communicating with other ships. No matter how many levels of safety we devise, there are always a few cases in which the loopholes in each of them align. Perhaps the ferry experienced such a fatal conjunction.

Second, organizations may be more to blame for disasters than individuals. Agencies and corporations nominally committed to safety may ignore good engineering practice to meet what they consider urgent goals. In her study of the 1986 Challenger launch decision, the sociologist Diane Vaughan pointed to what she called the “normalization of deviance.” A culture like NASA’s that becomes overly concerned with budgets and timetables may no longer recognize that it is encouraging its members to take unacceptable risks to meet them. In the Sewol’s case we need to look beyond the captain to the rest of the officers and company procedures. Roll-on-roll-off vehicle decks like the one on the Sewol can make ships unstable if flooded. Was there special vigilance to protect against damage from loose equipment? The communications officer has said he had not participated in evacuation drills and didn’t have time to read the evacuation manual: Were he and other officers provided with pocket summary charts?

At the other extreme, excessively strict accountability can bite back. Some of the greatest disasters have happened on the watch of experienced and capable officers. In 1977, when a control tower’s communications with two planes on the ground became confused on Tenerife in the Canary Islands, a KLM 747 collided with a Pan American 747 on a foggy runway with the loss of 583 lives. The KLM pilot was one of Europe’s most respected. But one of the causes, investigators concluded, was his seniority. Junior officers who should have questioned his decisions about hints of danger may have remained silent. Was there a similar problem on the Sewol? Were officers and crew members aware of potential problems, but afraid to report them?

Continue reading the main story
Third, crowds interact unpredictably with technology. The most controversial aspect of the wreck of the Sewol has been the crew’s decision to instruct the passengers to remain in their cabins. This may turn out to be a fatal, even criminal error. But on an unstable ship, passenger behavior can be a wild card. In 1915, the passenger steamer Eastland, chartered for an excursion of young Western Electric factory workers and known to be prone to listing, capsized at its dock in the Chicago River, trapping more than 800 aboard. Too many passengers were on one side of the boat, perhaps because they had rushed from one side to another as the vessel began to list and the crew tried to stabilize it with ballast.

The real lesson of the Sewol may turn out to be that evacuating a ship or even a building is one of the most complex tasks for technology and human judgment. “Evacuation dynamics,” a discipline at the intersection of physics, engineering, architecture and social psychology, is barely 15 years old, but the principle is familiar: All of those individual disciplines play a part in a successful evacuation.

At least two approaches to planning for future emergencies are promising. Where technology is inherently risky, it is possible to reduce casualties significantly by fostering what social scientists call high-reliability organizations — teams in which all members take responsibility for safety and respond creatively to failure. The best known may be the United States Navy’s program for flight deck operations on aircraft carriers at sea; the researchers Gene Rochlin, Todd LaPorte and Karlene Roberts describe a carrier as “one gigantic school, not in the sense of rote learning, but in the positive sense of a genuine search for acquisition and improvement of skills.”

For civilian ferries and other passenger vessels everywhere, it’s time to design the vessels and organize the crews for safety from the inside out — to rethink ship layouts in the light of human behavior in emergencies. To be certified in the United States by the Federal Aviation Authority, a commercial aircraft must be capable of evacuation within 90 seconds, even if half the exits are blocked. Obviously so rapid an evacuation is impossible at sea, nor would it normally be required. But a collaboration of designers and behavioral scientists, financed by shipbuilders, shipping lines and maritime insurance companies, should create realistic goals, and then develop new and tested procedures that could avoid panic and cut evacuation time. As software for simulation and computer-assisted design improves, a new generation of safer designs and more efficient evacuation procedures should be achievable.

Evidence of past successes is all around us. Today’s outward-opening building doors have “panic bars” and prominent “Exit” signs for a reason: lessons learned as long ago as Chicago’s Iroquois Theater fire of 1903, which killed over 600 people, many of whom piled up at exits of a new “fireproof” structure. Today’s goal should be not just finding blame for failure and giving credit for success in disaster management, but creating a new generation of marine technology.

Edward Tenner, a visiting scholar at Rutgers and Princeton, is author of “Why Things Bite Back: Technology and the Revenge of Unintended Consequences and Our Own Devices: How Technology Remakes Humanity.”