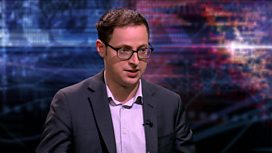 ‘Life is messy – I give you the odds’

Nate Silver is seen as a political astrologer with an uncanny ability to get it right.

His prediction of the US presidential election result last year was spot on – when most pundits were saying the race was too close to call.

He has been credited with re-shaping the art and science of political forecasting. But has he robbed electoral campaigns of their substance by reducing them to mere statistics and number-crunching?

He tells Zeinab Badawi about the purpose of his work, why he thinks his method improves on other political analysis and why, in the end, his techniques and outcomes are «not that complicated».

On May 11 and 12, 2013, Listening Post, the excellent Aljazeera weekly on how media covers the world, talked to Nate Silver in the second half of the show, starting at 14:50.  Listening Post’s Meenakshi Ravi sits down with Nate Silver to discuss his methodology, and his new book, The Signal and the Noise: Why So Many Predictions Fail – But Some Don’t.

The US presidential election was one of the biggest stories of 2012, and when it came to predictions, there was only one winner. Statistician Nate Silver cut through the political ads, the barrage of polls and did what mainstream media struggled to do, predicting a simple win for President Barack Obama. Silver, who runs the numbers blog on the New York Times website, Five Thirty Eight, did not just predict the win – he accurately predicted the result in all 50 states.