A transcript of President Obama’s remarks on the 50th anniversary of the 1963 March on Washington, as released by the White House:

To the King family, who have sacrificed and inspired so much; to President Clinton; President Carter; Vice President Biden and Jill; fellow Americans.

Five decades ago today, Americans came to this honored place to lay claim to a promise made at our founding: «We hold these truths to be self-evident, that all men are created equal, that they are endowed by their Creator with certain unalienable rights, that among these are Life, Liberty and the pursuit of Happiness.»

In 1963, almost 200 years after those words were set to paper, a full century after a great war was fought and emancipation proclaimed, that promise — those truths — remained unmet. And so they came by the thousands from every corner of our country, men and women, young and old, blacks who longed for freedom and whites who could no longer accept freedom for themselves while witnessing the subjugation of others.

Across the land, congregations sent them off with food and with prayer. In the middle of the night, entire blocks of Harlem came out to wish them well. With the few dollars they scrimped from their labor, some bought tickets and boarded buses, even if they couldn’t always sit where they wanted to sit. Those with less money hitchhiked or walked. They were seamstresses and steelworkers, students and teachers, maids and Pullman porters. They shared simple meals and bunked together on floors. And then, on a hot summer day, they assembled here, in our nation’s capital, under the shadow of the Great Emancipator — to offer testimony of injustice, to petition their government for redress, and to awaken America’s long-slumbering conscience.

We rightly and best remember Dr. King’s soaring oratory that day, how he gave mighty voice to the quiet hopes of millions; how he offered a salvation path for oppressed and oppressors alike. His words belong to the ages, possessing a power and prophecy unmatched in our time.

But we would do well to recall that day itself also belonged to those ordinary people whose names never appeared in the history books, never got on TV. Many had gone to segregated schools and sat at segregated lunch counters. They lived in towns where they couldn’t vote and cities where their votes didn’t matter. They were couples in love who couldn’t marry, soldiers who fought for freedom abroad that they found denied to them at home. They had seen loved ones beaten, and children fire-hosed, and they had every reason to lash out in anger, or resign themselves to a bitter fate.

And yet they chose a different path. In the face of hatred, they prayed for their tormentors. In the face of violence, they stood up and sat in, with the moral force of nonviolence. Willingly, they went to jail to protest unjust laws, their cells swelling with the sound of freedom songs. A lifetime of indignities had taught them that no man can take away the dignity and grace that God grants us. They had learned through hard experience what Frederick Douglass once taught — that freedom is not given, it must be won, through struggle and discipline, persistence and faith.

That was the spirit they brought here that day. That was the spirit young people like John Lewis brought to that day. That was the spirit that they carried with them, like a torch, back to their cities and their neighborhoods. That steady flame of conscience and courage that would sustain them through the campaigns to come — through boycotts and voter registration drives and smaller marches far from the spotlight; through the loss of four little girls in Birmingham, and the carnage of the Edmund Pettus Bridge, and the agony of Dallas and California and Memphis. Through setbacks and heartbreaks and gnawing doubt, that flame of justice flickered; it never died…. MORE An Intimate Look at the March on Washington

Fifty years ago, photographer Leonard Freed captured the spirit of the protest through the faces in the crowd

The anniversary of the 1963 March on Washington for Jobs and Freedom is most often memorialized as the anniversary of Martin Luther King Jr.’s «I Have a Dream» speech, his famous words resonating through half a century. But one man is not a movement, and the march made history for drawing more than 200,000 souls — making it the single-largest protest in American history on that August 28 nearly 50 years ago.

The marchers came from all over the country, Maine to Mississippi, dressed in the prim styles of the time and bearing in mind the early-1960s protest strategy of looking more respectable on the picket line than in everyday life, the better to convince the outside world. The faces of the marchers — ecstatic, eager, joyous, hot and tired — are the major subject of This Is The Day: The March on Washington, a collection of the luminous images of photojournalist Leonard Freed (1929-2006) published by Getty Publications earlier this year. Images from the book will be on display in Washington for the next six months as part of the Library of Congress show «A Day Like No Other: Commemorating the 50th Anniversary of the March on Washington,» which opens August 28 and also features the work of other important photojournalists of the day.

Newspapers often seek to document major rallies and marches with images that show their vastness and their speakers, but the 75 images in Freed’s book show the march from a more intimate perspective, the one seen by the youthful crowd that gathered on the Mall. «Photographing is an emotional thing, a graceful thing,» Freed is quoted as saying in the book. «Photography allows me to wander with a purpose.»

The photos above and below, taken on a Leica, are from This Is the Day, which does not caption the images. (Click on the images to enlarge them.)

Security for the day was tight, according to a foreword to the book by Julian Bond: 150 FBI agents on the scene; 1,900 Washington police officers mobilized; 30 helicopters, a 4,000-person armed task force and 15,000 troops on standby. But protestors were allowed to use signs with wooden sticks, and the day began with stacks of them waiting to be picked up by marchers: see PHOTOS

One week before the 50th anniversary of the 1963 March on Washington for Jobs and Freedom — and just days away from a major march this Saturday commemorating the event — Democracy Now spent the hour looking at much of its forgotten history.

More than a quarter-million people came to the nation’s capital on August 28th, 1963 to protest discrimination, joblessness and economic inequality faced by African Americans. Many now consider the march to be a key turning point in the civil rights movement.

Democracy Now  explores in this program the largely untold history behind the march and how Dr. Martin Luther King Jr.’s famous «I Have a Dream» speech, like his own political legacy, remains widely misunderstood. «I think today, the way the speech and the march are understood is wrapped in the flag, and seen as one more example of American genius, when in fact it was a mass, multiracial, dissident act,» says Gary Younge, author of «The Speech: The Story Behind Dr. Martin Luther King Jr.’s Dream.» «The powers that be really did not want this [march] to happen. The march was policed like a military operation», he adds.

Democracy Now also speaks to historian William P. Jones, author of «The March on Washington: Jobs, Freedom, and the Forgotten History of Civil Rights.» «It really had a very profound effect on shifting the national conversation, even within the civil rights movement itself, toward a major focus on the connections between racial equality and economic justice,» Jones says. 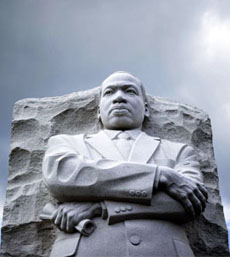