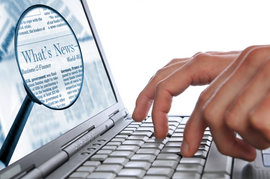 American Journalism Review is a national magazine that covers all aspects of print, television, radio and online media. This article discusses the complexities of embedding journalists with troops. It also outlines the Pentagon’s definition of “embedding” and its reasoning behind the practice.

This article explores the increasing lack coverage of the war in Iraq and the reasons that may have contributed to the decrease in media interest.

The Radio-Television News Directors Association (RTNDA) is a professional organization serving the electronic news profession and is tasked with setting standards for newsgathering and reporting. The site provides links to coverage of the war in Iraq as well as links to government resources about terrorism.

Contexts magazine is published by the American Sociological Association, and answers the question “Why does that happen?» with the research and experience of sociologists in the United States. The article focuses on embedded journalist and US government’s use of them to gain favor for the war.

The Columbia Journalism Review is a media monitor—a watchdog of the press, from newspapers and magazines to radio, television, and cable to the wire services and the web.

The primary focus of this article is the creation of “milblogs” written by soldiers in the field and civilians back home. They emerged to describe life in the military at war and complain about the press’s failings on war coverage.

Columbia Journalism Review. «Into the Abyss. Reporting on Iraq 2003-2006»
http://cjrarchives.org/iraq/

The link includes excerpts and anecdotes from the forty-six journalists who covered the war in Iraq. The interviews create an oral history of their experience in Iraq.

European Internet Network is a conglomeration of over 40,000 news sections of current event publications. It is currently being used as a resource for journalists, analysts, industry professionals and others who need to follow the latest developments in every country’s economy, business, industries, politics, international relations as well as human rights, religion, and terrorism.

FAIR (Fairness and Accuracy in Reporting), is a national media watch group offering criticism of media bias and censorship. This link is for coverage of the war in Iraq and contains links to archived articles.

Fairness and Accuracy in Reporting. «Wrong on Iraq? Not Everyone» by Steve Rendall
http://www.fair.org/index.php?page=2847

The Global Issues website focuses on promoting global awareness of issues and shows how most are inter-related. Topics range from trade, poverty, globalization, human rights, geopolitics, and the environment. This article looks at the way propaganda shaped initial media reports following the Iraq invasion.

Global Policy Forum monitors policy making at the United Nations. This section looks at mass media coverage of the Iraq war and occupation. The primary focus is US-based media companies and ways in which they fed the public sensational, pro-war, news reports.

The Huffington Post is a news Web site providing daily updates and commentaries on the events in the U.S. and abroad.

Index on Censorship is British organization promoting freedom of expression. The organization runs a magazine and website to provide a window for original and challenging writing on vital issues around the world.

The Pew Research Center’s Project for Excellence in Journalism is a research organization that specializes in using empirical methods to evaluate and study the performance of the press. It is non partisan, non ideological and non political. This article looks at the inconsistencies in reports from various media outlets.

This article from the Pew Research Center shows data from media reports, specifically from embedded journalists.

This article from the Pew Research Center focuses on the sudden drop in embedded journalists in Iraq after coalition forces removed Saddam Hussein.

Media Workers against the War is a group composed of journalist and media staff. The group campaigns against the war on terror, and racism directed at Muslims as a consequence of war. The group also campaigns for better journalism whether pro-war or anti-war.

The Nation is a weekly journal of opinion featuring analysis on politics and culture. The special section on the Iraq war includes current and archived articles.

An independent non-governmental research institute and library located at George Washington University, the archive collects and publishes declassified documents obtained through the Freedom of Information Act. This section of the website allows access to resources and declassified documents pertaining to the war in Iraq.

NewsLab is an online resource center for television and radio newsrooms focusing on improving journalism practices. The article details the access allowed to journalists in Iraq, but shows their lack of reporting on the home front.

The Newseum is a museum dedicated to the last five centuries of news history. This link is dedicated to war reporting from the American Civil War to the war in Iraq.

Democracy Now! War and Peace Report is a news program that provides the audience with access to perspectives rarely heard in the mainstream media including, independent and international journalists, ordinary people, grassroots leaders, activists, academics and independent analysts.

FRONTLINE/World is a national public television series that turns its lens on the global community, covering countries and cultures rarely seen on American television. The video follows reporter Sam Kiley as he travels to Iraq to investigate Saddam Hussein’s weapons program, the impact of sanctions on Iraqi civilians, and human rights abuses.

This section of the FRONTLINE/World website has links to videos documenting the Invasion of Iraq, including interviews, timeline and analysis

The Poynter Institute is a school for current journalists and teachers of journalism. The link has a compilation of news and editorials from a variety of sources.

The Reporters Committee for Freedom of the Press. Homefront Confidential
http://www.rcfp.org/homefrontconfidential/index.html

The Reporters Committee for Freedom of the Press is an organization that provides free legal assistance to journalists. The website contains a series of articles highlighting the development of a climate hostile towards the press both domestically and abroad and its effect on reporters.

Slate is an online magazine covering current affairs and culture.

War TV. Guide to the War in Iraq
http://www.austhost.com/wartv/

War-TV is a website dedicated solely to coverage of the War in Iraq. The site includes live news feeds from media outlets around the world.