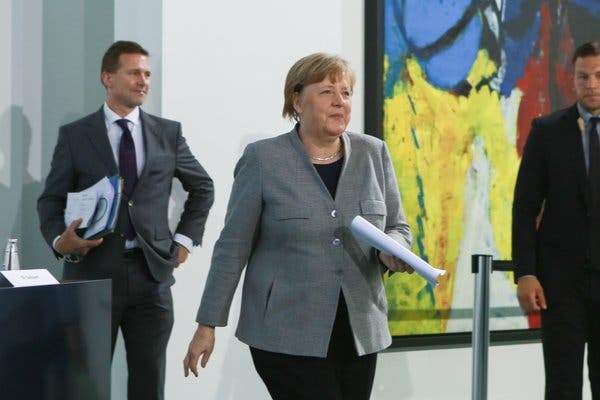 BERLIN — Chancellor Angela Merkel on Wednesday set in motion a plan for Germany to begin lifting social and economic restrictions in place because of the coronavirus, even as she warned that the road ahead would look less like a return to normal than a way to live with a pandemic that has overturned ordinary life.

The chancellor, a physicist by training, was typically restrained and focused on the science as she announced the government’s cautious step-by-step plan, for which she had won the agreement of regional leaders in Germany’s diffuse federal system.

Shorn of any bravado, her announcement seemed again to make Germany, Europe’s biggest economy, a de facto leader on the Continent and something of an example for Western nations looking to navigate the tricky course of rebooting economic activity and fighting the virus.

Her approach stood in stark contrast to the fraught political divisions in the United States, where state authorities have often been at odds with President Trump, who has made forceful but erratic predictions about the virus.

“We have achieved something,” Ms. Merkel said at a news conference, “something that by no means was a given at the start — namely that our doctors and carers, all those in the medical field, in the hospitals, were not overwhelmed.”

An economic lockdown will remain largely in place for an additional 20 days, Ms. Merkel cautioned, and strict social distancing rules will remain in force.

But some shops will be allowed to reopen beginning next week — although only those with the necessary protections in place to allow strict social distancing to continue, she said.

Older students might be allowed back to school in May but that will be contingent on a radically changed setup involving small groups, face masks and social distancing rules for school buses.