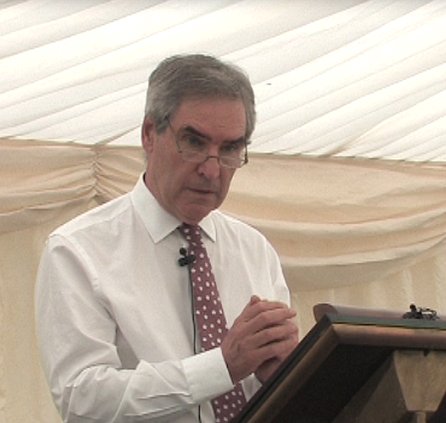 Let me begin by thanking the European Foundation for the Cerecedo prize and let me express my appreciation to his Royal Highness for presenting it.

It is to your credit, Sir, that you support a prize for a trade that knows how to spoil your breakfast.

I should know. I’ve been both a journalist and a politician and I can tell you it is more fun to ask the questions than have to answer them.

I have been a journalist, off and on, since I was seventeen. I was a copy boy for the New York Times, when it had an edition in Paris, in 1963. I sold the paper in the streets by day and tore wire copy off the tele-printer for the editors making up the edition by night. I worked as summer staff for The Globe and Mail in my hometown covering auto accidents and stabbings in bars. Since then I’ve made myself into a professor but from time to time I have vaulted over the monastery wall and landed, with pleasure, back in Grub Street. I’ve been a columnist for The Observer in London, and a documentary filmmaker for the BBC. I covered wars in the Balkans, Africa and Afghanistan for The New Yorker and The New York Times.

You are honoring me for work I did then and I thank you for it, but I was doing what journalists do, bringing the news back from the zones of danger to the zones of safety.

You are honoring me for work I did then and I thank you for it, but I was doing what journalists do, bringing the news back from the zones of danger to the zones of safety.

I was never one of the best, so I should pay tribute to those who are, the ones who risk their lives for a story, the ones who take the side of victims, the ones prepared to die with them if they have to: brave souls like Marie Colvin and Anthony Shadid, who died in Syria. They are the ones who redeem our trade and provide the rest of us with our alibis.

When I was in politics, I had my troubles with the trade, as every politician does. It’s never pleasant to see the pack closing in on you and it was always a relief when you could throw them off the scent.

Now that I’m my own man again, I am free to love the trade as one loves a high-living relative who buys your drinks at the bar and who tells you stories that are life-enhancing if not always reliable.

Journalism should be a celebration of life in all its vibrant, chaotic, exuberant variety. It calls people to come out to the circus. It’s ruined by pretension and high-mindedness. Journalists are not there to pronounce absolution on a fallen world. They’re not there to call us to a better life. They are there to show us who we are and how we live.

They are not historians. The idea that journalism is the first draft of history gives them too much credit. A good journalist is modest: his only job is simple, to decide what counts as news.

My point about our trade would be: it cannot be journalism unless it is free. Societies without freedom do not have journalism: they have propaganda.

So journalism trades on human freedom, and freedom is there to be abused, trifled with, to be put to ignoble uses. It cannot be otherwise. Freedom is an unruly virtue. It ceases to be freedom if it allows itself to be policed to worthy ends.

It is readers who keep journalism honest, and there is no better check to the power of the press than bored or disgusted readers walking away.

Over the last 60 years, the trade has lived through its biggest transformation since Gutenberg invented the printing press.

I have seen the disappearance of the linotype machines and roaring presses and the emergence of the silent touch screen. I have lived the change from the passive mass audiences of the 1960’s to the enabled and fragmented audiences of today. Once they were in receiving mode. Now they are in sending mode. Once they read what was put in front of them. Now they make up their own home pages.

It is conventional to lament the collapse of the shared democratic space created by public broadcasters and mass circulation newspapers. I’m not sure we should be sentimental about the old days and the old public sphere. Lots of people didn’t get a look in. Too many voices were never heard. We are more inclusive now, if more fragmented, and the new technologies—Twitter, Facebook and blogging, make every human being a journalist, if only of their own lives.

In this new universe, where everyone can be a journalist, the question becomes who has authority? Who do we trust?

The right answer never changes. I trust the journalists who think facts are stubborn things, who change their opinions when the facts change, who listen more than they talk, whose authority comes from having been there.

I trust the journalist who takes the trouble to talk to the sisters who may lose their apartment in Madrid to a bank foreclosure, who tell me what the sisters make every month, what the bank rules are, who tell me exactly why these sisters will fight to the end to keep from being thrown on the street. I trust the journalists who try every day to bridge the gulf between those who live in zones of danger and those who live in zones of safety.

I trust, finally, those journalists who can say with Goya, in that incomparable late etching in the Prado—I am learning. I am still learning.

If we are still learning, then we should not fear the new technologies but make way for the young who will thrive in this new world. I hope the aging aunts of the profession will keep paying for the journalism that is as good as literature and art, the journalism that astonishes, that makes you think, as Goya’s unforgettable painting of the executions of 2nd of May says to you : You are there. This is what it is like.

I thank you for this prize, for the privilege of a night together when we can eat and drink and talk about the trade we practice—its failings but also its glories—above all its association with that most unruly of the values we treasure: freedom.

The freedom to think, to laugh and scorn, to believe, to hope and to share.