The Military Balance,  a comprehensive assessment of global military capabilities and defence economics, is a reference work on developments in global military and security affairs. In the 2013 issue, which, as so many other publications of this kind review the year past -the prospective of the new year is not the main focus-, the editor starts, as in the previous year, 2012, with the turbulent transformations going on in the Arab world, specially Syria. 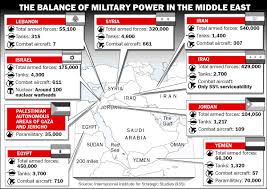 Military Balance in the Middle East

The strategic consequences of the Arab Spring and the brutal conflict in Syria again dominated headlines throughout 2012. Syria increasingly preoccupied policy planners in the Middle East and Europe, given the impact of the war on Syrian civilians and its destabilising effect on the immediate region. At time of writing, the prospects for direct military intervention from abroad seemed remote. For defence analysts, however, Syria added to the increasingly complex global military and security environment in 2012. China’s rise manifested itself in new ways, particularly in growing maritime capabilities. Western defence budgets continued to contract, with increased pressure on defence planners to balance financial priorities with the requirement to hedge against longer-term strategic risks….
The Military Balance 2013 Editor’s Forward