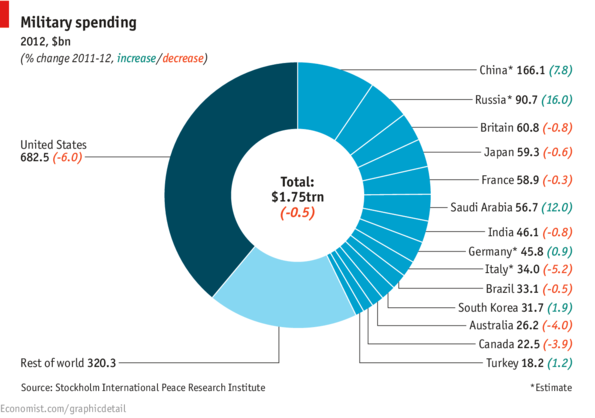 Which countries spend most on their military?

GLOBAL defence spending fell by 0.5% to $1.75 trillion last year. This is the first annual decline since 1998, according to new data from the Stockholm International Peace Research Institute, a think-tank. Although America still spends the biggest chunk of the world total, and 69% more in real terms than it did in 2001, its share has fallen below 40% for the first time since 1991. Indeed, since the recession in 2008, spending has fallen by 10% in 20 of the 37 countries in western and central Europe. By contrast Russia increased spending by 16% in 2012 and further rises are planned to 2015. Russia and America each spent the equivalent of 4.4% of GDP, considerably higher than the global average of 2.5%, but much lower than that of Saudia Arabia, at 8.9%. Over the past decade China’s military budget has risen by 175%, the largest increase of any of the countries shown in the chart, though this still represents only around 2% of GDP. (THE ECONOMIST. Apr 15th 2013, 14:17 by Economist.com)