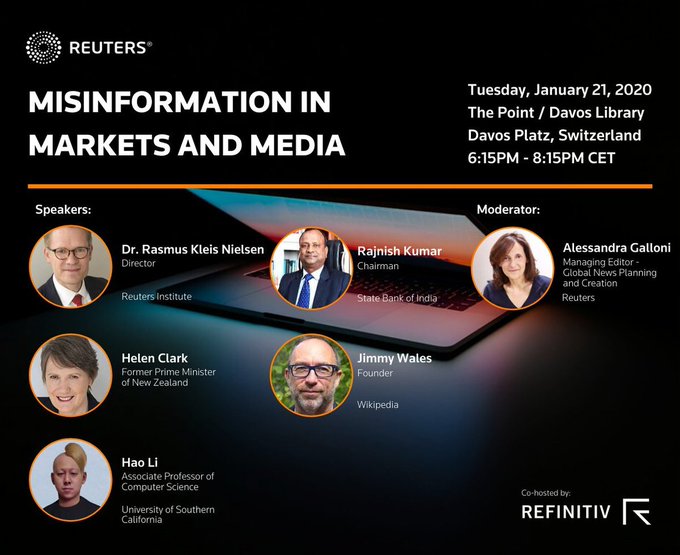 -«It is increasingly difficult to know what’s true and what’s false,» says

@aagalloni
-«Across 38 countries, on average 55% of the people in our survey find it hard to distinguish between truth and fake. But this % differs from country to country,» says
@rasmus_kleis
–«Across the 38 countries we survey, only 49% of the public trust the news they rely on,» says
@rasmus_kleis
@rasmus_kleis–«The problem we face is that people don’t trust public institutions and sometimes they are right not to trust them,» says, who mentions Iraq War and climate change denial as examples of misinformation
–«People tend to trust upmarket newspapers, news agencies and broadcasters that are heavily regulated. And they are skeptical of tabloids and partisan papers,» says @rasmus_kleis
–«Deep fakes are only the beginning. We can create things that no one can say whether they are true or false,» says @HaoLi81 at the He shows how anyone can impersonate Leo Messi or @LeoDiCaprio-«Less than half the public trust the news they rely on … The wider problem is that the public doesn‘t trust established institutions and sometimes they are right not to trust them … So don‘t judge the public when they judge us harshly.“
@HelenClarkNZ –«Social media platforms started with a good intent. They wanted to connect people. The problem is that some people are not benign,» says, who mentions what happened in #Christchurch at the misinformation panel at #Davos2020
–«Fake news has zero impact onn@wikipedia . The reason is that our community of editors are quite vigilant and quite experienced. False stories don’t get very far,» says @jimmy_wale–.@jimmy_wales mentions his experience launching @WikiTribune, an alternative to @twitter with no paywall and no ads
–«Something that is blatantly false is taken down in five minutes on average at @wikipedia» says
@jimmy_wales
–«The approach from@reuters and @Wikipedia is not to take down everything that is wrong but to provide a space that is trustworthy,» says @rasmus_kleis–«Freedom of speech is a fundamental human right. So we have to think in those terms. As a company, @Facebook should take things seriously misinformation in apps like @whatsapp,» says
@jimmy_wales
–«There is not a clear pattern on what to do about platforms & misinformation. Germany has been very proactive and levels of distrust are low. But Nordic countries have done almost nothing and distrust is low too,» says @rasmus_kleis–«The problem with regulating misinformation is that there may be edge cases. And who will make the decision in those? Mark Zuckerberg? @sundarpichai? Who gets to say what’s published and what’s not? This is tricky territory,» says @jimmy_wales-How to regulate tech platforms? Read our recent report on media public policy the EU here reutersinstitute.politics.ox.ac.uk/risj-review/what-can-be-done-digital-media-policy-options-europe-and-beyond…
–«Reliance on social media diversifies news consumption: they consume news from more sources and from more diverse sources,» says @rasmus_kleis. «I don’t know anyone under 40 who would trade our current media environment for any other»
–Our seminar series, chaired by @MeeraSelva1 at @greentempleton, starts this Wednesday with a talk by @dragz on the truth behind echo chambers. All the seminars are open to everyone. Learn more about the speakers here https://reutersinstitute.politics.ox.ac.uk/business-and-practice-journalism-seminar-series-hilary-2020…