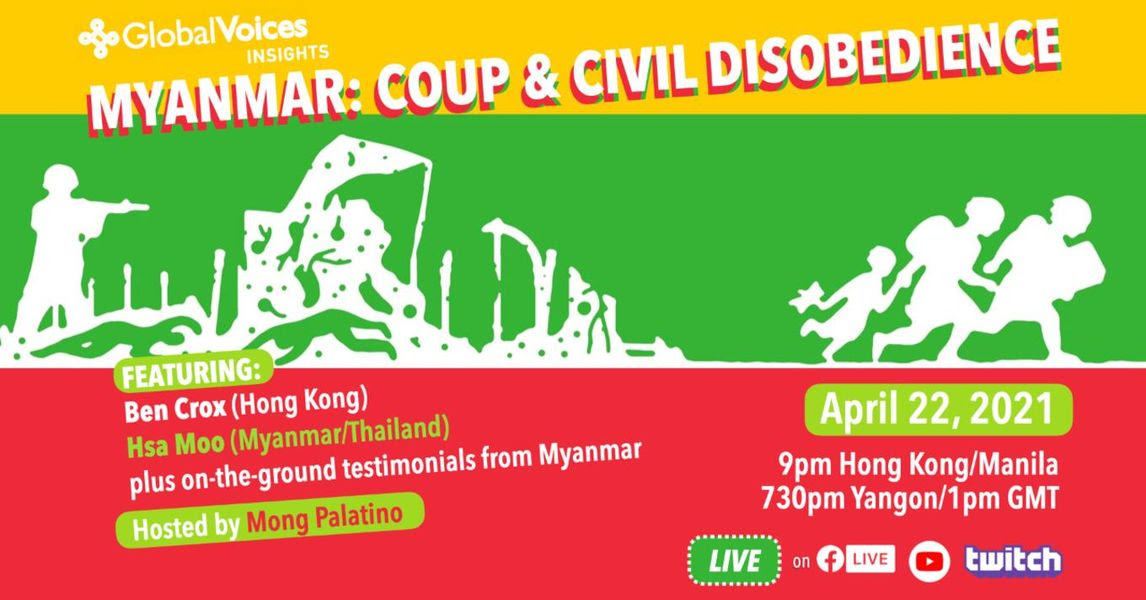 The Tatmadaw, Myanmar’s military, staged a coup on February 1. Two-plus months later, hundreds have been killed by the junta, thousands detained, and many more facing arrest warrants. What the military didn’t anticipate, however, was the resistance and defiance of Myanmar’s citizens, who continue to challenge the coup and the armed forces’ terror tactics.

Myanmar’s pro-democracy movement has devised creative and daring ways to express dissent, in spite of internet disruptions, harassment and attacks on journalists, and the forced closure of several news outlets.

As events continue to unfold, and as part of our ongoing coverage of the situation, Global Voices will host a webinar on April 22 at 1pm GMT (click on this link to calculate the equivalent time in your time zone) to explore what’s happening in Myanmar.

In conversation with our invited guests and through testimonials from people inside Myanmar, we’ll explore what it’s like to live under siege by the military—and to resist those forces, especially during a pandemic. We’ll learn more about the civil disobedience movement and how it became a potent weapon against the junta. And finally, we’ll seek to inspire solidarity and offer concrete ways for our readers and the global community to support Myanmar’s democracy movement.

Mong Palatino Global Voices’ Southeast Asia editor, Mong has spearheaded our coverage of the events in Myanmar. In addition to hosting the session, he will provide an overview of the country’s transition to democracy over the past decade and of what has transpired since the military takeover.

Ben Crox a Hong Kong-based BarCamp curator and a trainer on new media communication technology and skills, Ben has experience doing business in Myanmar and will discuss how people there are dealing with the military crackdown, and how people from the outside can help.

Hsa Moo a member of the Karen Environmental and Social Action Network (KESAN), Hsa will discuss the situation in Karen state and other parts of Myanmar.