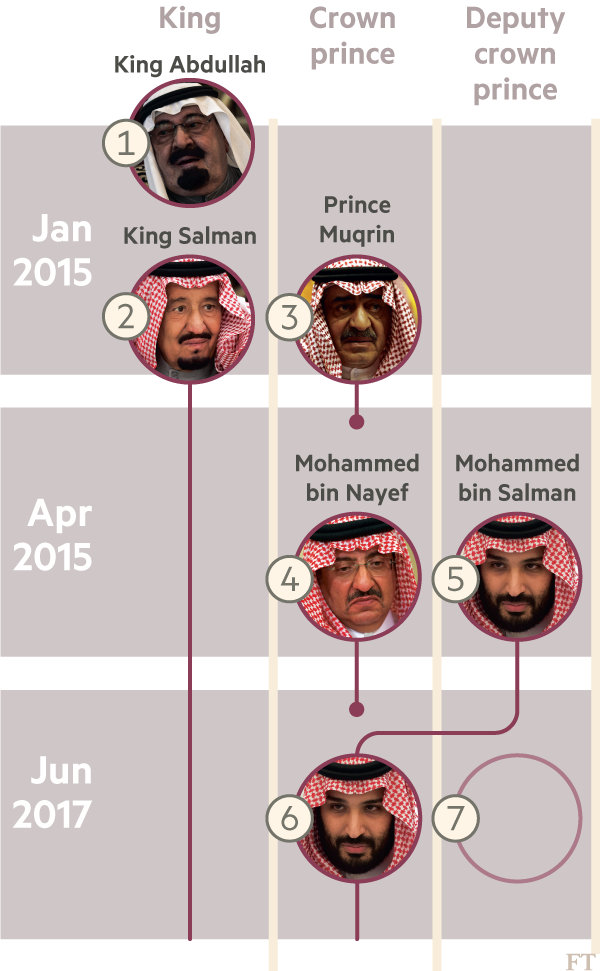 Anointment of ‘MBS’ as crown prince is biggest shake-up in ruling family for 50 years
by: Simeon Kerr in Dubai and Ahmed Al Omran in Riyadh (F. Times, June 21, 2017)
Hours after Prince Mohammed bin Salman was anointed crown prince, the young Saudi royal was shown kissing the hand and thigh of his elder cousin — the man he had just replaced in the most dramatic reshuffle in the kingdom’s recent history.
“I will always need your guidance and advice,” the 31-year-old prince told Mohammed bin Nayaf at a royal palace in Mecca. The latter, who had lost his position as heir apparent and had been dismissed as interior minister, said he would now be able to rest, while patting the younger royal’s shoulder.
The choreographed exchange on Wednesday was intended to depict a unified royal family as it went through a radical power shift that is reshaping the leadership of Saudi Arabia, the world’s top oil producer and crucial US ally.
It puts Prince Mohammed on course to succeed King Salman, his octogenarian father, and solidifies his power base as he pushes ahead with highly ambitious plans to transform the kingdom for a post-oil future.
“While it’s been on the cards for a while, this still represents the most significant shake-up within the Saudi ruling family for 50 years. If it succeeds, it could position Mohammed bin Salman to reign for decades and decisively reshape the kingdom,” said Kristian Coates Ulrichsen of Rice University.
…MORE