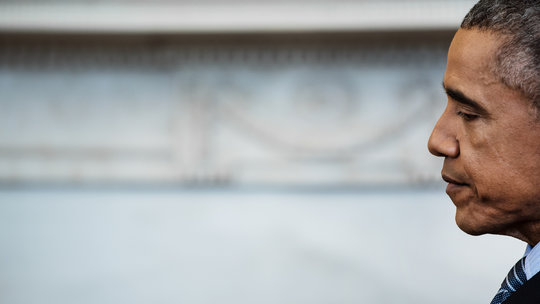 In September 1996, I visited Iran. One of my most enduring memories of that trip was that in my hotel lobby there was a sign above the door proclaiming “Down With USA.” But it wasn’t a banner or graffiti. It was tiled and plastered into the wall. I thought to myself: “Wow — that’s tiled in there! That won’t come out easily.” Nearly 20 years later, in the wake of a draft deal between the Obama administration and Iran, we have what may be the best chance to begin to pry that sign loose, to ease the U.S.-Iran cold/hot war that has roiled the region for 36 years. But it is a chance fraught with real risks to America, Israel and our Sunni Arab allies: that Iran could eventually become a nuclear-armed state.

President Obama invited me to the Oval Office Saturday afternoon to lay out exactly how he was trying to balance these risks and opportunities in the framework accord reached with Iran last week in Switzerland. What struck me most was what I’d call an “Obama doctrine” embedded in the president’s remarks. It emerged when I asked if there was a common denominator to his decisions to break free from longstanding United States policies isolating Burma, Cuba and now Iran. Obama said his view was that “engagement,” combined with meeting core strategic needs, could serve American interests vis-à-vis these three countries far better than endless sanctions and isolation. He added that America, with its overwhelming power, needs to have the self-confidence to take some calculated risks to open important new possibilities — like trying to forge a diplomatic deal with Iran that, while permitting it to keep some of its nuclear infrastructure, forestalls its ability to build a nuclear bomb for at least a decade, if not longer.

“We are powerful enough to be able to test these propositions without putting ourselves at risk. And that’s the thing … people don’t seem to understand,” the president said. “You take a country like Cuba. For us to test the possibility that engagement leads to a better outcome for the Cuban people, there aren’t that many risks for us. It’s a tiny little country. It’s not one that threatens our core security interests, and so [there’s no reason not] to test the proposition. And if it turns out that it doesn’t lead to better outcomes, we can adjust our policies. The same is true with respect to Iran, a larger country, a dangerous country, one that has engaged in activities that resulted in the death of U.S. citizens, but the truth of the matter is: Iran’s defense budget is $30 billion. Our defense budget is closer to $600 billion. Iran understands that they cannot fight us. … You asked about an Obama doctrine. The doctrine is: We will engage, but we preserve all our capabilities.”

The notion that Iran is undeterrable — “it’s simply not the case,” he added. “And so for us to say, ‘Let’s try’ — understanding that we’re preserving all our options, that we’re not naïve — but if in fact we can resolve these issues diplomatically, we are more likely to be safe, more likely to be secure, in a better position to protect our allies, and who knows? Iran may change. If it doesn’t, our deterrence capabilities, our military superiority stays in place. … We’re not relinquishing our capacity to defend ourselves or our allies. In that situation, why wouldn’t we test it?”