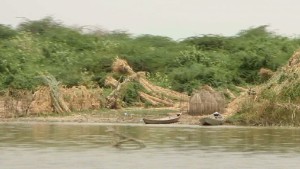 (CNN) — The license plates on our police escorts’ Land Cruisers read «Borno State, Home of Peace.» Many of those we meet during our stay in Maiduguri, northeast Nigeria, smile bitterly at the irony of that statement. The state’s capital is now better known as the birthplace of Boko Haram and peace here is always uncertain.

Down the dusty streets we drive, passing checkpoint after checkpoint manned not by soldiers but civilians, mostly armed with little more than machetes and swords. These vigilante groups, driven by a determination and motivation that the Nigerian security forces largely lack, have managed to establish some semblance of security in Maiduguri. Their pursuit of Boko Haram has become relentless — hardened as they are by losses to the terror group over the years — and they show no mercy, not even to family.

«I caught him with my hand and handed him over to the authority,» one of the sector’s leaders, Abba Ajikalli, tells us unapologetically. He is speaking about his 16-year-old nephew, who he says was with Boko Haram.

«He has been executed,» Ajikalli informs us, without a hint of remorse on his face. «He was like my son, I have no regret.»

What started as a home-grown movement for Sharia law in northern Nigeria is now a full-scale insurgency. Boko Haram attacks have terrorized this part of the country for years, but their kidnapping of nearly 300 schoolgirls in Chibok in April has brought them an unprecedented level of international infamy. Since then the insurgents, seemingly galvanized by the attention, have stepped up the frequency and brazenness of its attacks on villages in the region.

A presidential fact-finding mission is in Maiduguri at the same time as our trip. Each morning we receive word that they will travel to Chibok; each morning the residents and parents of the girls stolen from Chibok wait; and each afternoon everyone is disappointed by another postponement.