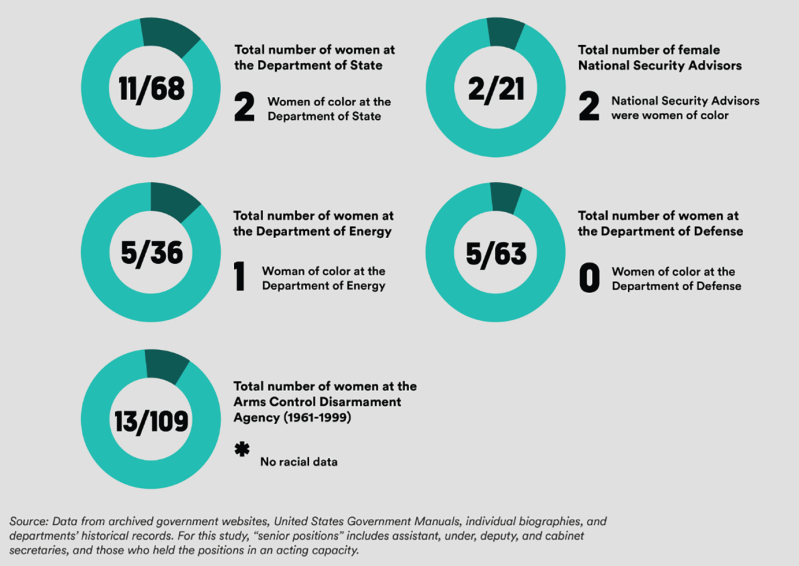 early three decades after the end of the Cold War, nuclear conflict remains the single greatest immediate threat to global security. The United States, Russia, China, France, the United Kingdom, India, Israel, Pakistan, and North Korea are currently nuclear-armed states, and Iran, Libya, and Syria have pursued nuclear activities at various times. The nine nuclear-weapons states possess roughly 15,000 nuclear warheads; even a single nuclear warhead deployed on a major city could take hundreds of thousands of lives in seconds. This week, the AP reports on a deep chill in U.S.-Russian relations that is raising concerns of a potential armed conflict.

Yet despite the paramount importance of solid and stable nuclear policy to U.S. and global safety, one clear avenue for improvement has been roundly neglected: Getting more women in the field. Research shows that, absent women’s full participation in nuclear issues, the potential for risk-taking behavior is higher, negotiated agreements are less likely to hold, and innovative ideas are left unheard.

A study by the Royal Society showed that men in simulated wargames scenarios are more likely to demonstrate overconfidence than women, pointing to the benefits of ensuring women are fully represented in high-level policy roles. The same study showed that overconfidence in high-stakes conflict scenarios is more likely to lead to a decision to attack a perceived enemy. Research from the peacekeeping field also tells us that bilateral nuclear deals as well as global commitments like the Treaty on the Non-Proliferation of Nuclear Weapons would be stronger with women’s participation: When civil society groups, including women’s organizations, participate in peace negotiations, agreements are 64 percent less likely to fail.

Yet women represent only about a quarter of delegates in international nonproliferation talks; research shows a 30 percent threshold that changes group dynamics enough to lead to better outcomes. And at the 2015 Non-Proliferation Treaty Review Conference, 33 countries sent delegations with no female delegates or advisors, including Iran, Iraq, Egypt, Libya, and Syria—states that are nuclear-armed or have pursued nuclear activities.

When the New America think tank interviewed 23 high-level U.S. female policymakers about their experiences in the nuclear field, they rejected the idea that women are more dovish and men more hawkish but reported that when women are present in policy discussions, collaboration was valued over competitiveness and innovation was more welcome. Research from the private sector supports New America’s findings: Gender diversity, when supported by gender-supportive norms and regulations within an industry, leads to better productivity and better exchange of diverse viewpoints.

Women have, in fact, played a role in nuclear security and policymaking dating back to the 1950s, when they were 20 percent of the CIA’s professional staff, according to New America. And some women are well known for their contributions, such as former Undersecretary of State for Political Affairs Wendy Sherman, who was awarded the National Security Medal by former President Barack Obama for her leading work to reach an agreement that would limit Iran’s nuclear activities.