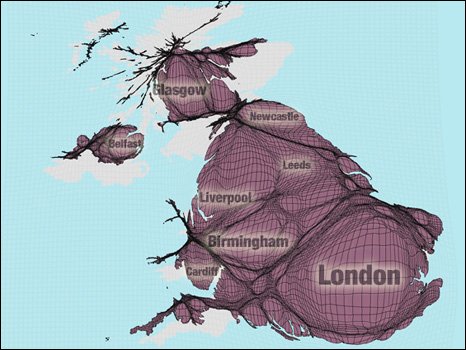 Conventional maps show the shape of a country according to its land mass. But what if you drew a map according to where people lived?

At first glance they could be mistaken for distorted creepy-crawlies – bloated body parts with randomly placed antennae and spindly legs, their gridlines looking much like the compound eyes and variegated wings of an insect.

In fact, each image is a country map – reinterpreted by a pair of Sheffield University geographers. The result is a remarkable series of cartographic designs that cast the world in an entirely new light.

The map of Britain above, for example, is a reworking of a traditional map using data about where people live to highlight population density across the country… MORE