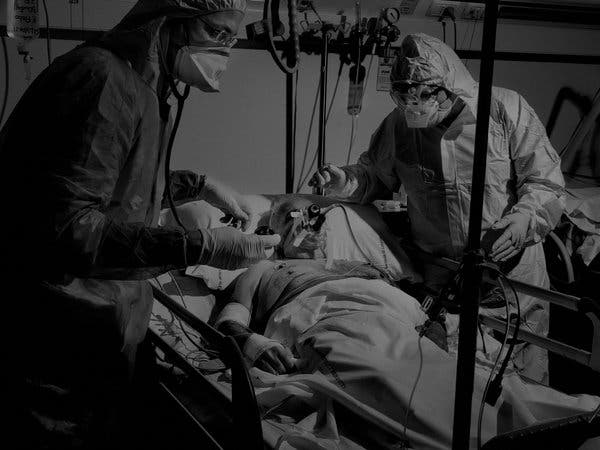 A photograph from Alex Majoli’s Vanity Fair photo essay on life during the pandemic in Italy.Credit…Alex Majoli/Magnum Photos for Vanity Fair (via @nytimes)

March was shaping up to be a good month for Brian Bowen Smith, a photographer in Los Angeles who has worked for Vogue and GQ. He had five big jobs lined up, including shoots for two movie posters. All five were canceled because of the coronavirus pandemic.

“There is no work whatsoever,” he said. “It’s kind of scary, actually.”

To fill his newly free hours, Mr. Bowen Smith drove to Joshua Tree National Park and trained his camera on the barren landscape. It was a long way from the work that usually pays his bills. In recent years, when he is not photographing Christian Bale, Miley Cyrus and Issa Rae for major magazines, Mr. Bowen Smith has shot ad campaigns for Marc Jacobs and other fashion companies.

Now he is telling himself that everything will be OK. “A lot of stuff can be done remotely,” he said. “And maybe that’s going to be our future. Everyone wears masks.”

As practitioners of a craft that requires long hours of getting up close and personal with their subjects, photographers have been affected by social distancing restrictions perhaps more than other media workers.

“Photographers can’t do what reporters can do — they can’t be on the phone,” said María Salazar Ferro, emergencies director of the Committee to Protect Journalists. “They have to be very close to the action.”

Josh Ritchie, a freelance photographer in Florida, estimated that he lost $10,000 in recent weeks because of canceled assignments. To scrounge up money, his attorney has been scouring the web for illegal use of his images.

Some photojournalists, like Gary He, have gone in search of images particular to a unique moment. One of Mr. He’s photographs, taken last month for the food website Eater, captured an unsettling scene that would have been unremarkable before the spread of the virus: Dozens of people, including delivery workers, crowded on a Manhattan sidewalk as they awaited pickup orders from the restaurant Carbone.

“I did a lot more shooting from across the street than I normally would have,” Mr. He said in a text message. And that meant a change in gear. “I use a midrange zoom for most of my work,” he added, “and I’ve been using the longer end of the lens a little bit more these days, to get me a few feet further away from my subjects, mostly for their safety and comfort.”

Some photographers have come down with the virus. Mark Kauzlarich, a freelance photojournalist and commercial photographer whose work has appeared in The New York Times, The Atlantic and Vanity Fair, said he got very sick last month. Doctors told him it was Covid-19, although he was not tested.

“I had said very openly I was sure I was going to get sick,” he said. “We have to be in the field. There’s no way to completely mitigate.”

Mr. Kauzlarich, who is on the mend, sounded as if he would not change his approach. “To be a good journalist,” he said, “you can’t be 40 feet away.”

Anthony Causi, a staff sports photographer for The New York Post, died of Covid-19, the paper announced on Sunday. A spokeswoman said The Post did not know how Mr. Causi had contracted the disease.

The pandemic may be the biggest news story of a generation and, while taking precautions, many editors have sought to get images that show it. On March 10, Radhika Jones, the editor in chief of Vanity Fair, commissioned Alex Majoli to photograph his hard-hit home country, Italy. Vanity Fair published his photo essay on Sicily two weeks later.