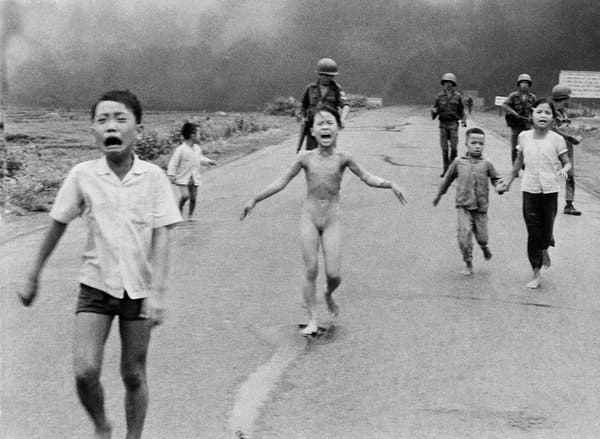 Nine-year-old Phan Thi Kim Phuc, center, fleeing her South Vietnamese village in 1972. She had ripped off her burning clothes after the village was hit with napalm.Credit…Nick Ut/Associated Press (v @nytimes Feb 17, 2020)

Photos of suffering children have the power to soften sentiment toward the “other.” Can that still happen in a polarized age?

NASHVILLE — On June 8, 1972, Nick Ut, a Vietnamese photographer working for The Associated Press, shot a now-iconic photo of children fleeing napalm mistakenly dropped on their village by South Vietnamese forces. At the center of the photo is a naked 9-year-old girl named Phan Thi Kim Phuc. She is in agony; her skin appears to be melting. None of the helmeted soldiers in the background are looking at the children. Only the photographer sees her pain.

Now we all see her pain. The photo, which was published by The Times and other newspapers three days later, shocked readers with its clarion depiction of the costs of war. The photo won a Pulitzer Prize in 1973. Later that year, U.S. forces withdrew from Vietnam. Whether or not the photo is directly related to the withdrawal, at the very least it fed the growing antiwar sentiment in this country and may have hastened the end of the war.

“Napalm Girl” belongs to a tradition of photojournalism that furthers the cause of social justice. There’s David Jackson’s 1955 image of 14-year-old Emmett Till in his coffin, murdered for being black in Jim Crow Mississippi. Sam Nzima’s 1976 photo of a teenager carrying a lifeless child in his arms during the Soweto uprising in South Africa. Kevin Carter’s 1993 photo of a starving Sudanese child being watched by a vulture. Nilufer Demir’s 2015 photo of a 3-year-old lying facedown in the surf, drowned with his mother and brother in a desperate attempt to flee the war in Syria. John Moore’s 2018 photo of a terrified 2-year-old Honduran child seeking asylum with her mother at the southern U.S. border. These photographs clarify a particular cultural moment; they distill the vast churn of history into a single image so searing it returns in your dreams to make you weep in the dark.

As with Mr. Ut’s photo of Ms. Kim Phuc, it’s never completely clear whether that image is the actual cause of a communitywide lurch toward empathy, but the correlation, at least, is almost always evident. The federal government did dismantle Jim Crow laws in the segregated South, even if it dragged its feet in doing so. American forces did ultimately leave Vietnam. Apartheid did finally end in South Africa. European countries did eventually open their borders to refugees. After months of defending it, the Trump administration did end its brutal family-separation policy at the southern border, at least officially.

The Times’s recent photography roundup of the past decade got me to thinking about the power of photographs to affect the course of history. So many of these photos were made during times of profound extremity: war, natural disaster, deep social unrest. There are heart-wrenching pictures of survival and death amid the rubble, of an unarmed man and an unarmed woman facing down officers in riot gear, of tribal members protesting the Dakota Access pipeline, of death in the cause of freedom. Images of ugliness cheek by jowl with images of honor, photos of fury side by side with pictures of love.

But the photos that stand out, again and again, are images of children: a baby in a portable crib watching an eviction team dismantling his home, terrified survivors of the massacre at Sandy Hook Elementary School being led from the building, a tiny girl howling at the edge of her father’s open coffin, a baby refugee from the Rohingya minority fleeing Myanmar in a sling on his mother’s hip, a 7-year-old dying of starvation in Yemen.