The Roman Catholic Church, chronicle of a papacy foretold 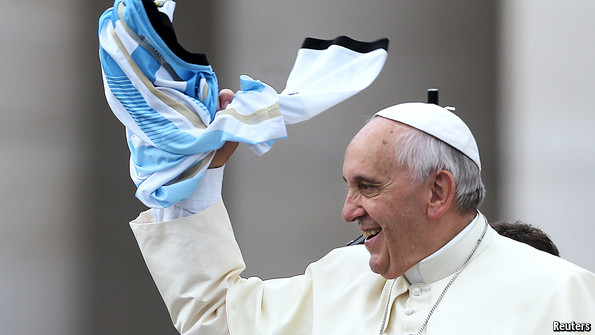 The Great Reformer: Francis and the Making of a Radical Pope. By Austen Ivereigh. Henry Holt; 445 pages; $30. Allen & Unwin; £20. Buy from Amazon.com, Amazon.co.uk

ON THE evening of March 13th 2013 a man previously known as Cardinal Jorge Bergoglio stepped out onto a balcony and blinked at the rain-soaked pilgrims in St Peter’s Square. They were instantly charmed by his modesty. His fellow prelates had “gone to the ends of the Earth” to find a pope, he declared, as though he were an improbably obscure choice.

The modesty was real, but his elevation was no fluke, according to a biography that delves deep into the Argentine pope’s personal history and ideological roots. Austen Ivereigh, a British Catholic, argues with passion and rigour that electing Cardinal Bergoglio pope signalled the surfacing of powerful undercurrents that had been swirling around for several decades in the world of Catholicism. Even during the monarchical reign of John Paul II, who centralised authority and quashed dissent, some countervailing trends were at work. They finally found expression in the choice of a pope from the south.

In quiet opposition to the “monarchy”, clusters of bishops from Latin America, among other regions, had been developing their own styles and sensibilities. Cardinal Bergoglio, as Mr Ivereigh calls him, was in the vanguard of a Latin American Catholicism that reflected the experience of ordinary people but somehow defied secular categories like liberal or socialist.

Mr Ivereigh lived in Argentina as a doctoral student in the 1990s, studying religion and politics. He is best when he situates the pontiff in his turbulent and seductive but brutal homeland, portraying Jorge Bergoglio, who was born to Italian migrants in 1936, as a product of the popular culture of Buenos Aires. His accent, style and tastes (in music, sport and even hot drinks) are those of a humble porteño, as the city’s residents are known.

As a cardinal, he was neither a mischief-maker nor a maverick. The intensity of his personal faith, forged in a life of adversity and Jesuit discipline, gave him a common language with conservatives like John Paul II and Benedict XVI; he understood what they were about. During the papal election of 2005, the book discloses, he won huge support from reformist cardinals but withdrew from the race himself, not wanting to oppose Benedict. By 2013 Father Bergoglio seemed both a breath of fresh air and a safeish pair of hands.

Mr Ivereigh has more to say about the cardinal’s past life than about his young papacy. In less than two years he has vastly improved the Vatican’s image, but he has also sent a paradoxical mixture of liberal and conservative signals. Nevertheless, the author has a deft way of mixing recent incidents with his subject’s early life.

Pope Francis excoriates the “golden calf” of the free market, and there are echoes of Marxist or even Leninist thinking in the way he links capitalism and war. But Mr Ivereigh locates the pontiff’s roots elsewhere: in the broad Argentine movement known as Peronism, a kind of populism tinged with nationalism which trusts the wisdom of ordinary folk and resents all elites. Some Peronists went Marxist; the young Father Bergoglio did not.

Nor, contrary to one version of his early life, did he have any truck with right-wing authoritarianism. That last point needs spelling out, because of an accusation that was warmed up at his elevation. It was alleged that as Argentina’s most senior Jesuit, Father Bergoglio had betrayed two leftist members of the order, allowing them to be arrested and tortured by the dictators who took power in 1976. Mr Ivereigh energetically refutes the charge, arguing instead that he used subterfuge to save dozens of people from the junta and did his best to secure the two leftists’ freedom.

A common theme in the life of Pope Francis, as emerges in this book, has been suspicion of any earthly ideology (from Marxism to liberal capitalism) which seems to have an answer for every question. The pope’s counterproposal is a kind of Christian humanism, which insists that no problem affecting mankind can find a solution without considering the practical consequences for ordinary people, and without discerning the will of God.

It is in those terms that Mr Ivereigh sets out to explain the pope’s seemingly conflicted positions on homosexuality and marriage. While sounding kinder towards gay people—“who am I to judge?”—than any previous pope, Francis opposes adoption by same-sex couples because, to his Catholic mind, it seems like a project of middle-class secularists to deny children the right to have conventional parents.

The pope also shows more sign than his predecessors of understanding the human dilemmas posed by abortion and assisted suicide, but still hews to the church’s teaching on the sanctity of life. Even among people who disagree with all those views, Francis commands sympathy. For his part, he has acknowledged the integrity of people, including atheists and Marxists, whose beliefs differ from his own; and the respect is often mutual. His idiosyncratic humanism, forged in a land of political and economic turmoil, seems infectious. This book explains where it comes from.

Some of the prelates come from countries that have never before been represented at such a high level in the Catholic Church — including Tonga and Cape Verde.

The Future of the Catholic Church With Pope Francis by Garry Wills review – a history of change in an timeless… http://d.gu.com/8v9q6S

Can the new pope usher in an age of inclusivity and atone for the sins of the past? This book, by a former Jesuit, looks into the church’s history of reversals for clues