EDUCATION ministers across the globe quake in the run-up to the publication, every three years, of the OECD’s Programme for International Student Assessment (PISA), which rates 15-year-olds’ academic performance in dozens of countries. Those that do well can expect glory; the first PISA ranking, published in 2001, surprised the world by putting unshowy Finland near the top in every subject and made it a mandatory stop-off for any self-respecting education policymaker. Germany’s poor showing, by contrast, led to national hand-wringing, school reforms and the creation of a €4 billion ($5 billion) federal education support programme.

Similarly influential is the yearly Ease of Doing Business Index from the World Bank. Government presentations to investors will always show the highlights (provided, that is, there are numbers worth boasting about). The Trafficking in Persons (TIP) report compiled by America’s State Department each year ranks governments on their perceived willingness to combat trafficking. A bad showing blackens a country’s name and can mean losing aid and investment.

Such performance indices, which rank social issues or policy outcomes in different countries by combining related measures into a single score for each, are enjoying a boom. Their number has soared over the past two decades (see chart). For many issues, rival indices must now battle it out. “Numbers, rating and ranking catch people’s attention and make information easy to process,” saysJudith Kelley of Duke University, who studies the impact of global indicators on policy. Rankings spread like wildfire on the web: some have been cited online more than a million times. 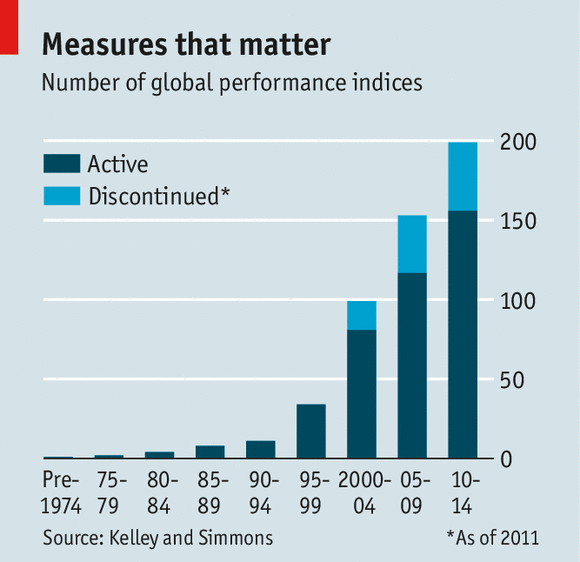 The best indices are meticulous (PISA, for instance, combines dozens of carefully standardised sub-measures and raises statistical caveats). But others are based on shaky figures that are calculated differently in different countries. And choosing what to include often means pinning down slippery concepts and making subjective judgments. An index of democracy, freedom or happiness means putting hard numbers to the fairness of elections, weighing civil liberties against economic rights, or deciding how much to rely on surveys

Related topics
In this section