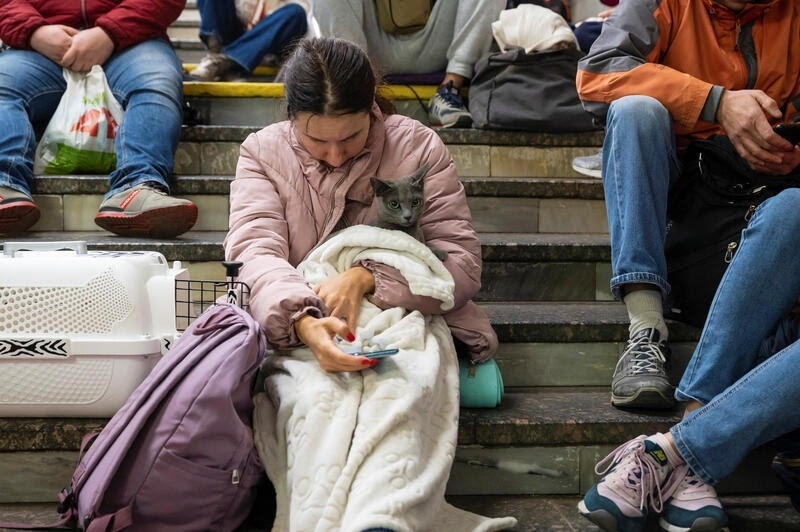 A woman with a cat shelters inside a subway station during a Russian missile attack in Kyiv, October 11, 2022. REUTERS/Viacheslav Ratynskyi v @Reuters

President Volodymyr Zelenskiy will ask the leaders of the G7 group of nations to urgently supply Ukraine with air defense weapons, after Russia rained down cruise missiles in its latest escalation of its unraveling invasion.

Ukrainians woke up to the wailing of new air raid sirens, with parts of the country left without power. Officials said 19 were killed yesterday in cruise missile strikes across the country, the biggest air raids since the start of the war.
Britain would expect to see indicators if Russia was starting to consider deploying its nuclear arsenal in its war with Ukraine, Britain’s top cyber spy said. After more than seven months of war, Jeremy Fleming, director of the GCHQ spy agency, told BBC Radio that Russia was running short of munitions, friends and troops.

The United Nations and other aid organizations in Ukraine said that Russia firing missiles at cities across the country had disrupted their humanitarian work on the ground, while blackouts after the strikes have deepened Ukrainians’ concerns ahead of winter.

Germany can weather a winter energy shortage caused by Russia’s invasion of Ukraine provided companies and households pull together, the German chancellor said before European Union ministers meet again on the energy crisis. Here’s why the Russian gas supply gap is casting a chill in Europe as winter nears.

Nissan will hand over its business in Russia to a state-owned entity for 1 euro, it said, taking a loss of around $687 million and exiting the country months after it was forced to halt production there.