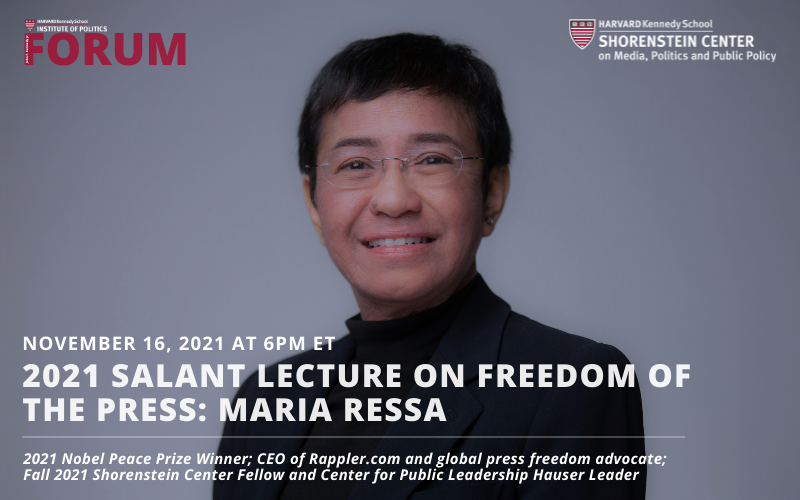 On Tuesday, November 16th at 6:00 pm ET in the John F. Kennedy Jr. Forum, this year’s Salant Lecture on Freedom of the Press was delivered by Maria Ressa, 2021 Nobel Peace Prize winner, co-founder and CEO of Rappler.com, Fall 2021 Shorenstein Center Fellow, and Center for Public Leadership Hauser Leader. Shorenstein Center on Media, Politics and Public Policy Director Nancy Gibbs introduced the lecture, and Dr. Latanya Sweeney, the Daniel Paul Professor of the Practice of Government and Technology at the Harvard Kennedy School, moderated the discussion and Q&A.

A journalist in Asia for 35 years, Maria Ressa co-founded Rappler.com, the top digital-only news site that is leading the fight for press freedom in the Philippines. As Rappler’s CEO and president, Maria has endured constant political harassment and arrests by the Duterte government.

Maria was awarded the 2021 Nobel Peace Prize for her courageous fights to uphold freedom of expression. She was also Time Magazine’s 2018 Person of the Year, and has received numerous other awards and recognition for her journalism and fearlessness in the face of efforts to silence her.

The Salant Lecture on Freedom of the Press is delivered annually by a prominent journalist, scholar, or practitioner. Named for Mr. Richard Salant, a former president of CBS News, and a defender of the freedom of the press as well as a champion of high ethical and news standards for the press, the annual lecture is made possible through a 2007 fund established by Dr. Frank Stanton’s estate. Dr. Frank Stanton, also a former president of CBS News and staunch defender of First Amendment rights, set up the fund in honor of his longtime friend and colleague, Richard Salant, a graduate of Harvard College and Harvard Law School.