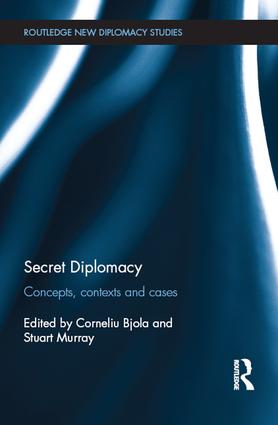 This volume investigates secret diplomacy with the aim of understanding its role in shaping foreign policy.

Recent events, including covert intelligence gathering operations, accusations of spying, and the leaking of sensitive government documents, have demonstrated that secrecy endures as a crucial, yet overlooked, aspect of international diplomacy. The book brings together different research programmes and views on secret diplomacy and integrates them into a coherent analytical framework, thereby filling an important gap in the literature. The aim is to stimulate, generate and direct the further development of theoretical understandings of secret diplomacy by highlighting ‘gaps’ in existing bodies of knowledge. To this end, the volume is structured around three distinct themes: concepts, contexts and cases. The first section elaborates on the different meanings and manifestations of the concept; the second part examines basic contexts that underpin the practice of secret diplomacy; while the third section presents a series of empirical cases of particular relevance for contemporary diplomatic practice. While the fundamental conditions diplomacy seeks to overcome – alienation, estrangement and separation – are imbued with distrust and secrecy, this volume highlights that, if anything, secret diplomacy is a vital, if misunderstood and unfairly criticised, aspect of diplomacy.

This book will be of much interest to students of diplomacy, intelligence studies, foreign policy and IR in general.