A dispatch from the front

No news is often good news. AIDS has dropped out of the headlines in recent years, and that is because, in the battle between virus and people, people are winning.

This year’s report by UNAIDS, the United Nations agency charged with combating the disease, confirms that optimistic picture. Though AIDS is not beaten (it still kills 1.6m people a year), this number is down from a peak of 2.3m in 2005. And the number of new infections per year has fallen by a third, to 2.3m, since 2001. Paradoxically, the number of those infected is rising. But this is because they are living longer. These trends are mostly the result of the spread of antiretroviral drugs, which are now taken by almost 10m people. They are paid for by a rise in the money spent on AIDS in poor and middle-income countries, to $18.9 billion in 2012.

Africa’s men (and Africa is still the seat of the epidemic, with 70% of cases) have also responded enthusiastically to the discovery that circumcision vastly reduces the risk of infection. Some 1.7m a year of them are now having their foreskins snipped off in 14 countries looked at by UNAIDS. 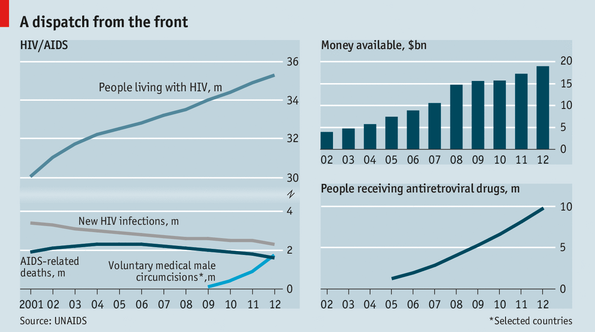 AIDS: News from the front

AIDS: Down, but not out

AIDS: Get your act together, guys

Two UN reports on AIDS are coming out this month. That is one too many

The UN and AIDS: Well, I declare!

One of the world’s worst plagues is giving ground

One of the world’s worst plagues is giving ground

The routine use of anti-AIDS drugs is spreading

MORE FROM THE ECONOMIST