Over the last two weeks, many Twitter users have observed some unusual sponsored tweets in their feeds like this one: 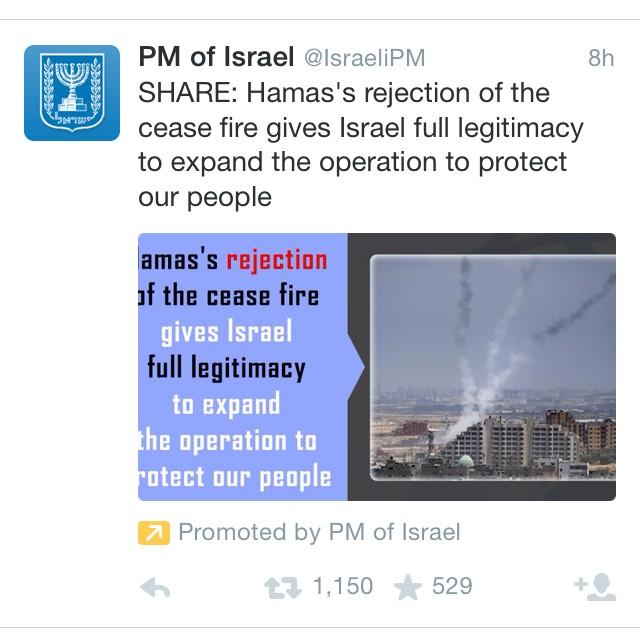 It’s not surprising that Israel’s Prime Minister Benjamin Netanyahu has been using his account on the social media site to garner support for Israeli actions in the conflict in Gaza. By purchasing sponsored tweets, a feature of the site typically used by advertisers, he ensures that his messages appear in the feeds of more Twitter users, not just those who follow his account. This strategy is just one example of the evolving role of social media in war and conflict.

For its part, Hamas’ military wing maintains a presence on Twitter in English. Its Arabic feed was recently suspended, along with a Hebrew account, used to communicate with Israelis.

The use of social media as a tool in times of war, uprising and military conflict is nothing new. Extremist groups such as the Islamic State group, formerly known as ISIS or ISIL, have incorporated the use of social media into their broader military strategy. During the Arab Spring, Twitter was both a catalyst for social unrest, demonstrations and revolution, and a valuable resource for journalists reporting on the situation.

Social media can be used to circulate true information in the face of censorship. It can also cause false information to go viral. It has powered revolutions, but it is also used to expand the reach of violent extremists. What is the role of social media in modern warfare? How has this changed as the medium evolves? What responsibility do sites such as Facebook and Twitter have to regulate (or restrict) users’ promotion of military actions?

We invited you to weigh in in a Twitter chat. John Little (@BlogsofWar), who blogs about international relations and national security on his website Blogs of War, and PBS NewsHour foreign affairs producer @PJTobia participated as guests. Read a transcript of the conversation below.