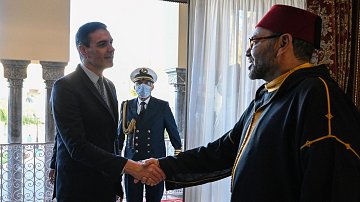 Rabat has won the day. After a fifteen-month crisis with Madrid, Premier Pedro Sanchez has finally approved the Moroccan plan for the autonomy of Western Sahara. The idea is to put an end to the conflict without resorting to the self-determination referendum demanded by the Polisario Front with the backing of Algeria.

In a letter written in French to King Mohamed VI dated 14 March 2022, Spanish Premier Pedro Sanchez declares that “Spain considers the autonomy initiative undertaken by Morocco to be the most serious, realistic and credible basis for resolving the conflict” over Western Sahara. The Spanish people, including the members of his cabinet, learned of this new position four days later, when the Moroccan King released that letter. With it, Sanchez goes a bit further than France and Germany. The French Foreign Ministry has described the Moroccan plan as “a basis” and not as “the most serious basis “on which to hold”serious and credible talks». The nuance is an important one. Among Western democracies, only the United States have sided firmly with Morocco when they recognised, on 10 December 2020, its sovereignty over Western Sahara.

Spain, like France, has always supported Morocco in the Sahara dispute, but Spanish diplomacy has never recognised this openly, always maintaining a pretence of neutrality. As proof of this discreet backing, the attorneys of the Spanish government have joined forces with those of several Moroccan associations to argue in favour of the legality of the fishing rights agreement between the European Union and Morocco before the General Court of the EU. To no avail: the Court struck them down at the end of September 2021.

For Morocco, that low-profile Spanish backing was not enough. Madrid had to confirm it publicly. Spain’s support is even more important as the country was once the colonial power ruling that territory, which is as large as the United Kingdom. And since Spain’s opinion in the matter is highly regarded, this decision may be imitated by other European and Latin American countries, or such is Morocco’s hope.

Morocco has spared no efforts to force the issue with Spain since 10 December 2020 when President Donald Trump recognised the “Moroccan character” of the Sahara. The same day, Morocco cancelled the summit talks between the two governments scheduled to begin on 17 December. This was only the first of a long list of misfortunes suffered by Spain.