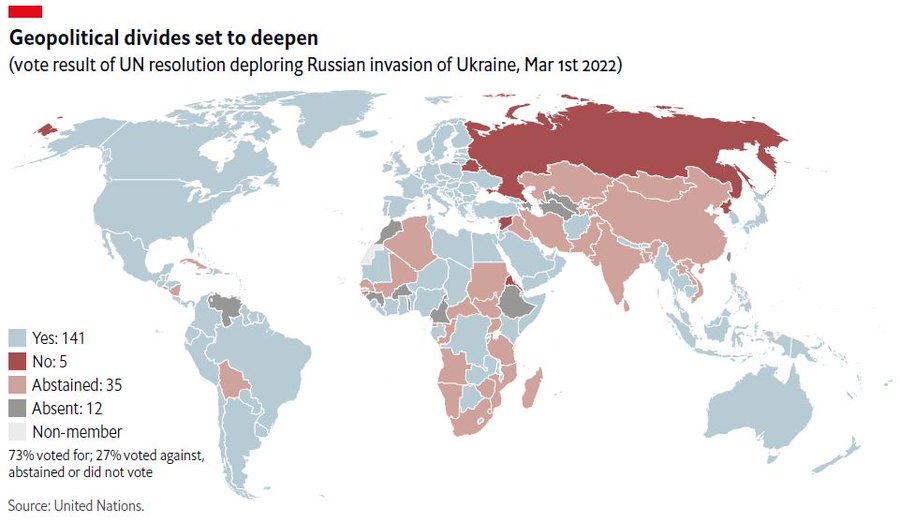 Russia’s war in Ukraine will bring about a new division of Europe. Discover how else the conflict will change the world https://econ.st/3N987XX

Russia’s invasion of Ukraine marks a defining moment in the reshaping of the geopolitical order. The battle for Ukraine is not just another regional war: it represents a rupture in RussiaWest relations that will have profound epercussions for Europe and the world. This analysis discusses ten ways in which the war will affect the global balance of power.

1. Russia’s war in Ukraine will bring about a new division of Europe Russia’s brutal invasion aims to destroy Ukraine’s sovereignty and prevent the country from ever joining NATO or the EU. Russia intends to annex at least part of Ukraine, thereby creating a buffer zone between Russia and the West that also includes Belarus and Kazakhstan. Russia’s repudiation of the Western-led “rules based order” signals a turning away from Europe and the creation of a new division of the continent, three decades after the fall of the Berlin Wall.

2. Russia’s violation of Ukraine’s sovereignty signals the end of the post-cold
war order. The first half of the post-cold war era was characterised by US unipolarity. A crisis-ridden Russia was economically and politically prostrate and incapable of resisting US unilateralism, while China was at an early stage in its ascendancy. The past 15 years or so have been characterised by the revival of Russia, the rise of China, growing intra-Western rivalry and the erosion of US hegemony. Russia’s invasion of Ukraine is a flagrant challenge to the US’s role as global policeman, and suggests that the world has become much more unstable and dangerous.

3. The war in Ukraine will deepen Russia’s strategic alliance with China
Ostracised from the international political, economic and financial system, Russia will turn east to cement its alliance with China. What began as a marriage of convenience has grown over the past decade into a strategic partnership. Russia began its “pivot eastwards” in 2012, having concluded that it was unlikely to be given a say in the European security order and that the economic future lay to the east. It has helped China in the fields of energy, air and sea power, intelligence, and military and foreign affairs, and in return it has received financing and technology. For China, an alliance with Russia offers security along its northern border, natural resources and a shared authoritarian approach and attitude to the West. At the Beijing Winter Olympics, before Russia’s invasion of Ukraine, presidents Xi Jinping and Vladimir Putin declared that their alliance would “know no limits” and would be “superior to political and military alliances of the cold war….