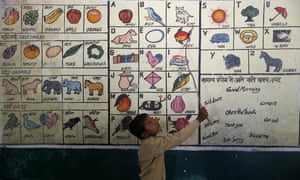 A schoolboy reads from illustrations painted on a wall in a school in Allahabad, India. Photograph: Rajesh Kumar Singh/AP v @guardian

Illiteracy is “a worldwide crisis” that will cost the global economy $1.2tn (£760bn) this year, the World Literacy Foundation (WLF) has warned. More than 796 million people are either completely illiterate, meaning they can’t read or write, or functionally illiterate, meaning they can’t perform basic tasks such as reading a medicine label, the WLF said in a report released on Monday (pdf).

People in rich and poor countries are “trapped in a cycle of poverty with limited opportunities for employment or income generation” because of illiteracy, the report said.

It used a formula developed by the UN’s Educational, Scientific and Cultural Organisation (pdf) that takes into account the size and structures of different countries’ economies. The formula estimates the cost of illiteracy to developing countries at 0.5% of their gross domestic product. In emerging economies, such as China and India, the cost stands at 1.2% of GDP, while in developed countries the cost is estimated at about 2% of GDP.

These estimates reflect a lower level of spending on social services such as welfare, health and the justice system in less developed countries, the report said.

This means that countries with the largest GDP are estimated to bear the highest cost of illiteracy. Rich countries lose some $898bn every year due to workforce illiteracy, which can reduce business productivity, while emerging economies lose $294bn, according to the report.