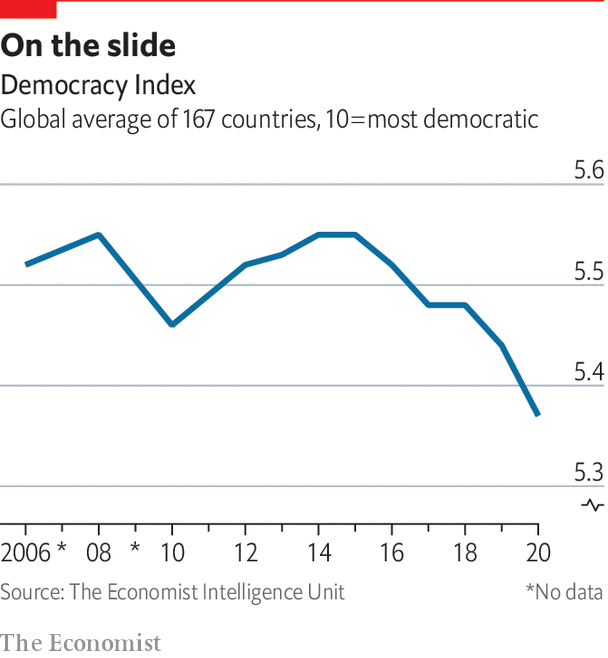 Global democracy continued its decline in 2020, according to the latest edition of the Democracy Index from our sister company, The Economist Intelligence Unit. The annual survey, which rates the state of democracy across 167 countries based on five measures—electoral process and pluralism, the functioning of government, political participation, democratic political culture and civil liberties—finds that just 8.4% of the world’s population live in a full democracy while more than a third live under authoritarian rule. The global score of 5.37 out of ten is the lowest recorded since the index began in 2006.

Government-imposed lockdowns and other pandemic-control measures led to a huge rollback of civil liberties in 2020, causing downgrades across the majority of countries. Confronted by a new, deadly disease to which humans had no natural immunity, most people concluded that preventing a catastrophic loss of life justified some temporary loss of freedom. The ranking penalised countries that withdrew civil liberties, failed to allow proper scrutiny of emergency powers or denied freedom of expression—regardless of whether there was public support for government measures. In France for example, severe lockdowns and national curfews led to a small but significant decrease in its overall score and the country dropped into the “flawed democracy” category.