According to a new Pew poll released on May 13, 2013, support for European economic integration – the 1957 raison d’etre for creating the European Economic Community, the European Union’s predecessor – is down over last year in five of the eight European Union countries surveyed by the Pew Research Center in 2013.

Positive views of the European Union are at or near their low point in most EU nations, even among the young, the hope for the EU’s future. The favorability of the EU has fallen from a median of 60% in 2012 to 45% in 2013. And only in Germany does at least half the public back giving more power to Brussels to deal with the current economic crisis.

The sick man label – attributed originally to Russian Czar Nicholas I in his description of the Ottoman Empire in the mid-19th century – has more recently been applied at different times over the past decade and a half to Germany, Italy, Portugal, Greece and France. But this fascination with the crisis country of the moment has masked a broader phenomenon: the erosion of Europeans’ faith in the animating principles that have driven so much of what they have accomplished internally.

The prolonged economic crisis has created centrifugal forces that are pulling European public opinion apart, separating the French from the Germans and the Germans from everyone else. The southern nations of Spain, Italy and Greece are becoming ever more estranged as evidenced by their frustration with Brussels, Berlin and the perceived unfairness of the economic system.

These negative sentiments are driven, in part, by the public’s generally glum mood about economic conditions and could well turn around if the European economy picks up. But Europe’s economic fortunes have worsened in the past year, and prospects for a rapid turnaround remain elusive. The International Monetary Fund expects the European Union economy to not grow at all in 2013 and to still be performing below its pre-crisis average in 2018. Nevertheless, despite the vocal political debate about austerity, a clear majority in five of eight countries surveyed still think the best way to solve their country’s economic problems is to cut government spending, not spend more money.

These are among the key findings of a new study by the Pew Research Center conducted in eight European Union nations among 7,646 respondents from March 2 to March 27, 2013. 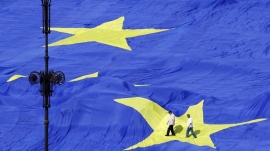