Europe faces a significant threat from terrorism, particularly from Islamic extremists and far-right groups. Europe’s challenges with terrorism have largely gone unnoticed in the United States, whose strategy documents like the U.S. Department of Defense’s National Defense Strategy have shifted away from counterterrorism and toward competition with state competitors like China, Russia, Iran, and North Korea. 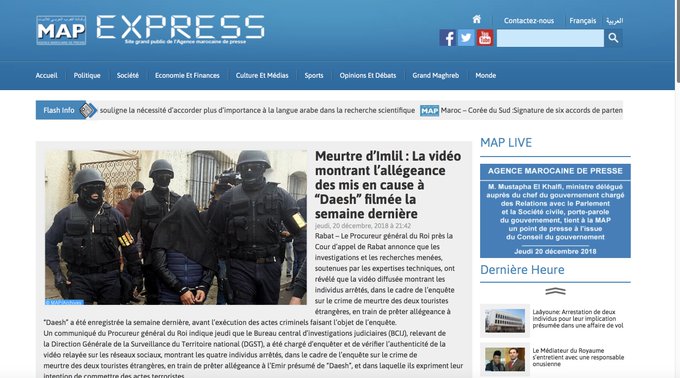 1. Apropos of ISIS being gone: In Morocco on Monday, the bodies of two tourists were found. Today, Morocco’s chief prosecutor confirmed that 4 men who had pledged allegiance to ISIS last week are in custody for the murder of Louisa Jespersen of Denmark & Maren Ueland of Norway: 0:21 – 21 dic. 2018

2. ISIS has not as yet claimed the attack & the pledge video screengrabbed here was not distributed on ISIS’ channels on Telegram, suggesting the men had no online connection to the terrorist group. But Denmark is calling the killings terrorism & 1 of the 4 has ties to extremists.

3. Here is what I learned from sources today: In the pledge video, you hear the men vowing fealty to «emir al-mumineem,» the emir of the believers, the term ISIS members use to refer Baghdadi. They also say they cannot «sit on the sidelines» while «Crusader planes» bomb people.

The flood of criticism that has followed President Trump’s sudden decision to withdraw U.S. forces from Syria is all too justified. The President’s decision was based on a fundamentally wrong strategic assumption: ISIS is not defeated and still has a significant presence in Syria and Iraq. Moreover, even the total defeat of ISIS as an organization does not mean the defeat of the terrorist and extremist threat in Syria. Just as ISIS rose out of the ashes of Al Qaida, some new extremist movement – like Al Nusra – will be born out of the remnants of ISIS.

As virtually all the President’s most senior experienced military and civilian advisors evidently pointed out to him before his decision, ISIS is still fighting in Syria and Iraq, it may well have some 40,000 fighters left in both countries, and it has a serious presence in other countries ranging from Africa to Asia. It is far too early to claim that ISIS is defeated and rush out of Syria – particularly suddenly and in ways that make it look like the U.S. is willing to abandon its allies and strategic partners without warning.