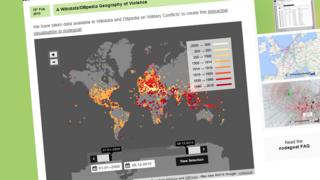 A Dutch company is attempting to map all the battles in history using Wikipedia. But what does it really tell us?

It looks like Europe and the US are the bloodiest parts of the world.

But the details – shown on a newly released map of all the recorded conflicts in history – rely not on academic books but information available, and editable by the public, on Wikipedia.

The Dutch data project Nodegoat is using an algorithm to piece together the details, taking the information from DBPedia, which collates information from Wikipedia, and the Wikidata database.

According to Nodegoat’s Geography of Violence map, the first recorded military conflict in history was the Battle of Zhuolu, in eastern China, in about 2500BC. Then, it says, no other dateable and locatable battle is known for more than 1,000 years until the Battle of Megiddo, in the mid-15th Century BC, between Canaanite and Egyptian forces.