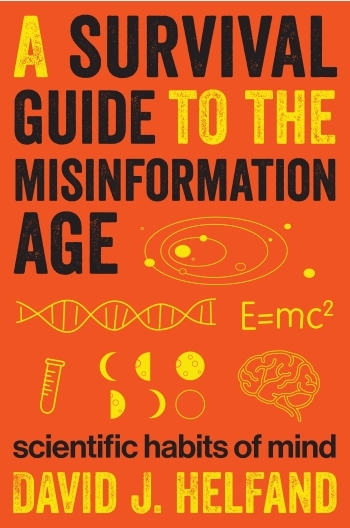 A Survival Guide to the Misinformation Age

We live in the Information Age, with billions of bytes of data all just two swipes away. But how much of this is of value? How much is mis-, or even dis-information? Lots. And your search engine cannot tell the difference. As a result, an avalanche of misinformation threatens to overwhelm the rational discourse we so desperately need to address complex social problems, such as climate change, the food and water crises, biodiversity collapse, and emerging threats to public health. This book provides an inoculation against the misinformation epidemic by cultivating scientific habits of mind. Anyone can do it—indeed, everyone must do it if our species is to long survive on this crowded and finite planet.

From dissolving our fear of numbers and demystifying graphs, to elucidating the key concepts of probability and the use of precise language and logic, this book supplies an essential set of apps for the pre-frontal cortex while making science both accessible and entertaining. Who says it has to be dull to learn to think like a scientist? Who says only a few can do it? Not David Helfand, one of our nation’s leading astronomers and science educators. Helfand has taught scientific habits of mind to generations of Columbia University undergraduates, where he continues to wage a provocative, unending battle against sloppy thinking and the encroachment of misinformation.

David Helfand is the former chair of the Department of Astronomy at Columbia University, where he has served on the faculty for nearly four decades. He has also been a visiting scientist at the Danish Space Research Institute and a Sackler Distinguished Visiting Astronomer at Cambridge University. He was a founding tutor and served as president and vice chancellor at Quest University Canada, as well as president of the American Astronomical Society. He has published commentary in Nature, Physics Today, the Globe and Mail, the Washington Post, and the New York Times, among other publications.