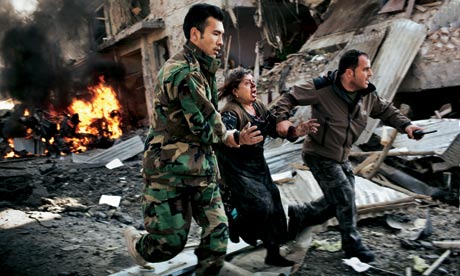 Adam Ferguson (Afg 209): ‘As a photographer, you feel helpless. Around you are medics, security personnel, people doing good work. It can be agonisingly painful to think that all you’re doing is taking pictures.’ Photograph: Adam Ferguson/VII Network (The Guardian, June 18, 2011)

The shot that nearly killed me: War photographers – a special report

Attacked by a Haitian mob, kidnapped by Gaddafi’s troops, shot in Afghanistan… Who’d be a war photographer?

I was one of the first on the scene. The Afghan security forces normally shut down a suicide bombing like this pretty quickly. I was able to get to the epicentre of the explosion. It was carnage, there were bodies, flames were coming out of the buildings. I remember feeling very scared because there was still popping and hissing and small explosions, and the building was collapsing. It was still very fresh and there was a risk of another bomb. It was one of those situations where you have to put fear aside and focus on the job at hand: to watch the situation and document it.

This woman was escorted out of the building and round this devastated street corner. It epitomised the whole mood – this older woman caught in the middle of this ridiculous, tragic event. I wish I could have found out how her life unravelled, but as soon as the scene was locked down, I ran back to the office to file.

As a photographer, you feel helpless. Around you are medics, security personnel, people doing good work. It can be agonisingly painful to think that all you’re doing is taking pictures… MORE

Afghanistan: The Photographs That Moved Them Most

Today (Oct 7, 2011), on the 12th anniversary of the start of the war in Afghanistan, TIME asks 40 renowned photographers to reflect on their harrowing experiences covering the conflict—and to describe which of their own photographs moved them most…  MORE

Read more: War Photographers in Afghanistan: The Images That Moved Them Most – LightBox http://lightbox.time.com/2011/10/07/afghanistan-the-photographs-that-moved-them-most/#ixzz2qE3WOfAP

In an age when the visual image has become a ubiquitous commodity, a photojournalist’s visual aesthetic isn’t enough, writes Jason Cone, Doctors Without Borders’ communication director in the US. Instead, what NGOs are now looking for is a photographer who already has an established audience.

Every day, I’m inundated with friend requests on Facebook and LinkedIn from photojournalists the world over inviting me to review their portfolios. They offer to provide free photos to work with Doctors Without Borders/Médecins Sans Frontières (MSF) in the field in return for helping them get to cover international stories.

Over the past 40 years, MSF has partnered with hundreds of photojournalists to document humanitarian crises ranging from the war in the Democratic Republic of Congo to the epidemic of drug-resistant tuberculosis.

But in this age when the visual image is a ubiquitous commodity – when the barriers to entry for the newest photographers have been nearly eviscerated with smartphones and social apps like Instagram – the photojournalist’s visual aesthetic, artistry, and style are a given and what really separates a photographer from the crowd is the network he or she brings to the negotiating table.

As communications director for a medical humanitarian organisation, I’m seeking to advance various objectives, for example, like putting the health crisis in the Central African Republic on the figurative map of political agendas or overhauling food aid to better address childhood malnutrition. Visual storytelling can play a critical role in drawing attention to an otherwise neglected issue…

Important lesson for all photographers – being networked… http://fb.me/1WkCFLR1F

Related Articles from The British Journal of Photography

The New Economics of Photojournalism: The rise of Instagram

Visa pour l’Image: Jean-François Leroy on social media, the future of photojournalism and the need for greater cooperation (2/2)

Q&A: Why is Emphasis now turning to its own platform to survive?

Beyond Instagram: Should photographers accept the risks inherent in social networks?