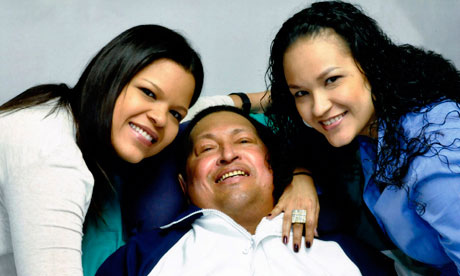 Hugo Chávez with her daughters

The return of Hugo Chavez to Venezuela from La Habana, inspires a myriad of questions about the president’s health, the state of the country and who is really running Venezuela. To help address those questions, Ray Suarez interviews Ian James, Caracas bureau chief for the Associated Press.

JUDY WOODRUFF: There was surprising news for many Venezuelans this morning, as they got word that their leader, Hugo Chavez, who had been away from his country for months, had returned there in the middle of the night.

Why Chavez’s surprise return on Monday, Feb 18? Associated Press could not give a clear answer in its report from Caracas published by The Guardian:

The government did not explain why Chávez made his surprise return on Monday. Government officials had in recent weeks said it was not clear when the president’s medical team would allow him to travel to Venezuela, though they had said they hoped it would be soon.

The 58-year-old president has not spoken publicly since he left for Cuba on 10 December. He underwent his fourth cancer-related surgery the following day and the government says he is now breathing through a tracheal tube that makes talking difficult.

In a letter to Chávez read on state television and radio, Cuba’s retired leader, Fidel Castro, said he was pleased that Chávez was able to return home.

«You learned much about life, Hugo, during those difficult days of suffering and sacrifice,» Castro wrote. «Now that we will no longer have the privilege of receiving news of you every day, we will return to the kind of [written] correspondence we have used for years.»

«All the signs  indicate that the Hugo Chávez era is over», wrote Phil Gunson in Foreign Policy on Feb 19th. And he added:

Confined to a bed and unable to speak, thanks to a tracheotomy, he seems unlikely ever to resume his presidential duties, despite official assurances that he remains in charge. The outsized ego that dominated the country’s politics for a decade and a half and that aspired to continental leadership is in the process of leaving the stage. Unable to conceive of life without power, he sacrificed the former for the latter. He leaves behind a political system adapted to satisfy the whims of one man, and an economy more dependent than ever on the international market price of a single commodity: oil. His departure threatens to shatter the illusion of stability that authoritarian rule invariably seeks to instill.

Every observer agrees on the fundamentals -that Venezuela is just at the beginning of a watershed transition, with all candidates to replace Chávez in a wait and see attitude, the country’s economy in very bad shape and plenty of strategic question marks on the duration and impact of the changes, given the umbilical relation between the Chávez and the Castro regimes in the region, and the influence of Venezuela, after 15 years of Chávez in power, in OPEC and in Latin America.