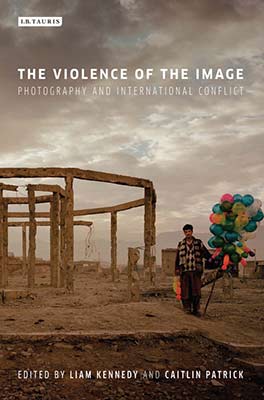 The Violence of the Image is a thought-provoking book that examines the roles of image producers and the functions of photographic imagery in the documentation and communication of wars, violent conflicts and human rights issues. It will appeal to a variety of readers, including those in history, photography, cultural studies, aesthetics, communications and human rights, finds Alexis Bushnell.

Recognizing the evolution of the nature of war, this book examines the role of photojournalism in representations of violence that accompany various modern and contemporary conflicts. The book, stretching eleven chapters, surveys the depictions of violence in photographic practice under (post-)colonial, complex humanitarian and cosmopolitan frameworks. Of note is the diversity of authors and the array of disciplinary lenses they represent. The book is relevant within a range of subjects as well as to practitioners.

The Violence of the Image is split into three parts; the first is ‘Framing Civil and (Post-)Colonial Conflict’, followed by ‘Politics and Photographic Ethics at the Turn of the Twentieth Century’, concluding with ‘The ‘Unstable’ Image: Photography as Evidence and Ambivalance’.

Christina Twomey’s chapter opens the book with an historical examination of the use of the Kodak camera, images of atrocity, and western humanitarian philanthropy as they may have influenced human rights concepts during the reign of Belgian King Leopold over Congo Free State (1885-1908). Leopold brutally used the people of the Congo in resource extraction, mutilating individuals who did not make production quotas, among an array of other atrocities. Missionaries to the Congo began photographically documenting Congolese people who had suffered mutilation under Leopold’s policies, in an effort to bolster reform campaigns in the west. It is at this time scholars argue there was a turn in the evolution of human rights concepts. Twomey accurately examines the discourse of human rights located within the conflict, and asserts that photography and the visualisation of the suffering in the Congo was not a defining moment in general human rights discourse; indeed that the visual medium and rights talk employed in the Congo was the exception rather than the beginning of a genealogy in human rights discourse. However, the photographs taken and distributed by missionaries are of significant historical importance, which Twomey demonstrates throughout the chapter. The following three chapters in this section provide nuanced analysis of the role of images in the war in Vietnam, the conflict in Northern Ireland, and the Algerian civil war.

The significance of the tactical use of space and temporality as contemporary tools in war are academically relevant themes discussed within the second part of the book, ‘Politics and Photographic Ethics at the Turn of the Twentieth Century’. The writing is timely as it compliments work being done in other disciplines on space and violence, particularly the work of architect Eyal Weizman, who documents the use of architecture as a method of occupation and violence in the West Bank and Gaza. Ariella Azoulay’s chapter on the infrastructure and spatiality of conflict uses photographs to demonstrate aspects of temporal and spatial uses of violence in ‘regime-made disasters’. Azoulay describes regime-made disasters as conflicts that are ‘ongoing and constantly impacts a defined part of the population under a regime that differentiates groups of citizens and non-citizens’ (p.126). Azoulay uses images of ruin and destruction of infrastructure in the West Bank and Gaza to demonstrate what she calls ‘infra-destruction’, described as ‘[not] superficial destruction, limited to one place or another, but a viral phenomenon to which no place in this space is immune’ (135). Importantly, the photographs reveal the violent nature of the conflict without the use of victims. A victimless approach to photographing conflict is discussed in other chapters as an alternative way of framing images.

The final part of the book, ‘The ‘Unstable’ Image: Photography as Evidence and Ambivalance’, consists of chapters discussing themes such as the ethical use of images of violence (in particular the footage of a dying Muammar Gaddafi), the emerging role of technology and social media, issues and authenticity of amateur images and the idea of ‘bearing witness’ to war through image taking (p.211). Paul Lowe’s chapter discusses ‘witnessing’ in photography and explores ethical issues of re-victimization and exploitation of suffering. Lowe offers solutions for documenting trauma through photographs that suggest violence rather than violent displays of perpetrators and victims. The last section of Lowe’s chapter discusses photojournalists who have left the traditional journalistic sphere to work in legal and forensic photography, appropriating techniques in evidentiary photography to represent conflict photography. This appropriation of forensic photographic techniques to trauma representation is argued by some to provide the viewer with a more complete understanding of a conflict, but this is an interesting debate.

The contributors to this volume in many ways confront a prevailing approach to photojournalism in the twentieth century, which Liam Kennedy and Caitlin Patrick explain sought to couple ‘democratising vision[s] of human affiliations and an imaginary globalisation of conscience’ (p.2). This approach of deliberately framing narratives through visual representations of complex conflicts has had implications on the way in which the global north has understood and moralised the suffering of Others in the global south. The purposeful framing of images of the Other has had profound effects on representations of communities, and has impressed a certain iconography of the suffering Other through a visual humanitarian discourse. Of note is Wendy Kozol’s chapter on images of women in the war in Afghanistan and western creations of women’s rights narratives.

Overall The Violence of the Image is a fantastically thought-provoking and well- written book, covering many conflicts and concepts. It will appeal to a variety of readers, including those in history, photography, cultural studies, aesthetics, communications and human rights. I would particularly urge students in human rights, as well as activists and practitioners to read this book.

This post originally appeared on the LSE Review of Books

Book Review: Sexual Violence as a Weapon of War? Perceptions, Prescriptions, Problems in the Congo and Beyond by Maria Eriksson Baaz and Maria Stern

Women and Conflict: Why We Should Not Separate Rape in War from the Everyday Reality of Violence

Prosecuting Sexual Violence – Some Steps Forward, But Still a Long Way to Go