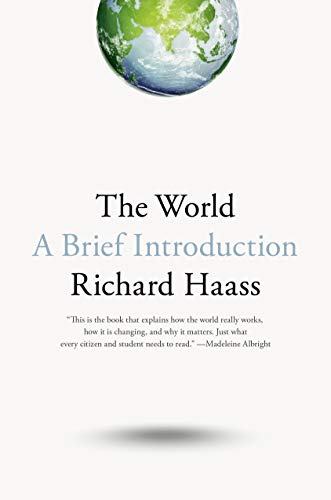 An invaluable primer from Richard Haass, president of the Council on Foreign Relations, that will help anyone, expert and non-expert alike, navigate a time in which many of our biggest challenges come from the world beyond our borders.

Like it or not, we live in a global era, in which what happens thousands of miles away has the ability to affect our lives. This time, it is a Coronavirus known as Covid-19, which originated in a Chinese city many had never heard of but has spread to the corners of the earth. Next time it could well be another infectious disease from somewhere else. Twenty years ago it was a group of terrorists trained in Afghanistan and armed with box-cutters who commandeered four airplanes and flew them into buildings (and in one case a field) and claimed nearly three thousand lives. Next time it could be terrorists who use a truck bomb or gain access to a weapon of mass destruction. In 2016 hackers in a nondescript office building in Russia traveled virtually in cyberspace to manipulate America’s elections. Now they have burrowed into our political life.

In recent years, severe hurricanes and large fires linked to climate change have ravaged parts of the earth; in the future we can anticipate even more serious natural disasters. In 2008, it was a global financial crisis caused by mortgage-backed securities in America, but one day it could well be a financial contagion originating in Europe, Asia, or Africa. This is the new normal of the 21st century.

The World is designed to provide readers of any age and experience with the essential background and building blocks they need to make sense of this complicated and interconnected world. It will empower them to manage the flood of daily news. Readers will become more informed, discerning citizens, better able to arrive at sound, independent judgments. While it is impossible to predict what the next crisis will be or where it will originate, those who read The World will have what they need to understand its basics and the principal choices for how to respond.

In short, this book will make readers more globally literate and put them in a position to make sense of this era. Global literacy–knowing how the world works–is a must, as what goes on outside a country matters enormously to what happens inside. Although the United States is bordered by two oceans, those oceans are not moats. And the so-called Vegas rule–what happens there stays there–does not apply in today’s world to anyone anywhere. U.S. foreign policy is uniquely American, but the world Americans seek to shape is not. Globalization can be both good and bad, but it is not something that individuals or countries can opt out of. Even if we want to ignore the world, it will not ignore us. The choice we face is how to respond.

We are connected to this world in all sorts of ways. We need to better understand it, both its promise and its threats, in order to make informed choices, be it as students, citizens, voters, parents, employees, or investors. To help readers do just that, The World focuses on essential history, what makes each region of the world tick, the many challenges globalization presents, and the most influential countries, events, and ideas. Explaining complex ideas with wisdom and clarity, Richard Haass’s The World is an evergreen book that will remain relevant and useful as history continues to unfold. Richard Haass, president of the Council on Foreign Relations and author of the new book The World: A Brief Introduction, sits down with James M. Lindsay to discuss why it’s important to get smarter about the world around us.

Richard N. Haass✔@RichardHaassYes, let’s celebrate 2020 High School graduates: #GraduateTogether. But too many are commencing their future w/o an adequate understanding of the 21st century world they are entering. My new book was written to provide just that: Get it for your graduate: https://bit.ly/2WWqgip

An invaluable primer from Richard Haass, president of the Council on Foreign Relations, that will help anyone, expert and non-expert alike, navigate a time in which many of our biggest challenges… penguinrandomhouse.com 2:37 PM – May 15, 2020

The Challenges of a Threatening World (By Mark Atwood Lawrence, May 12, 2020)

-PDF: The World -by Richard Haass
How Will Coronavirus Pandemic Change The Way We See The World? -NPR, May 14, 2020
Richard Haass on the Future of Europe, America’s Global Relationship, U.S. Election Risks Bloomberg, May 13, 2020

U.S. Global Leadership Amid the Coronavirus Pandemic, With Philip H. Gordon, CFR, April 28, 2020
Are the US and China headed for a new Cold War?
Council on Foreign Relations President Richard Haass joins Fareed to discuss the future of US-China relations as Covid-19 exacerbates tensions. Source: CNN