This week in Say More, PS talks with John Andrews, a former editor and foreign correspondent for The Economist, and the author of The World in Conflict: Understanding the World’s Troublespots.

Project Syndicate: Many observers have mined the history of prewar Europe for insights into the rise of anti-democratic political forces today. You recently highlighted a few “dispiriting lessons” from that period, including the potentially devastating consequences of “political leaders’ readiness to sacrifice their professed principles.” We see that readiness today in the US Republican Party’s embrace of former President Donald Trump, and arguably in British Prime Minister Boris Johnson’s consolidation of control over the Conservative Party. What can be done to arrest these parties’ slide toward illiberalism?

The United States faces a combination of problems. Election campaigns are exorbitantly expensive. Cable television and talk radio have abandoned even the pretense of objectivity. 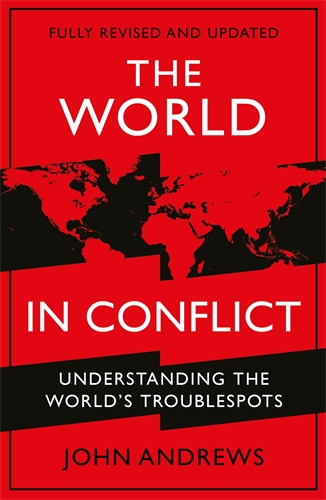 The complete handbook on the causes and current status of global hostilities, now in its third edition

The Earth is riven by dangerous and shifting faultlines. Since the previous edition of The World in Conflict, we have witnessed the apparent collapse of Isis in Syria and the reawakening of the Troubles in Ireland. Donald Trump first goaded and then mollified North Korea, the world’s most enigmatic nuclear power, before provoking Iran into renewing its atomic ambitions. And alongside traditional warzones, a new set of global battle lines are being drawn across cyberspace.

Join the veteran Economist journalist John Andrews on a tour of the ancient enmities and imminent collisions that define conflict in the twenty-first century. Region by region discover the causes, contexts, participants and likely outcomes of every globally significant violent struggle now underway. From drug cartels to cyber war, this is the indispensable guide for anyone who wants to understand our perilous world.