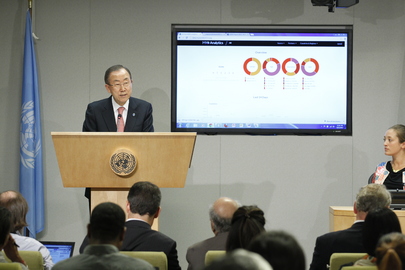 Secretary-General Ban Ki-moon addresses a press conference launching the United Nations Development Group (UNDG) report entitled, “One Million Voices: The World We Want”. The report collects perspectives on the ‘”orld we want” from over 1 million people around the globe. It is hoped that these voices will contribute to reaching consensus on what is needed to move towards a common sustainable future, as UN member states consult on the shape and content of a successor framework to the Millennium Development Goals (MDGs) beyond 2015.