These seven maps and charts, visualized by The Washington Post, will help you understand how diverse other parts of the world are in terms of languages.

1. Some continents have more languages than others

Not all continents are equally diverse in the number of spoken languages. Whereas Asia leads the statistics with 2,301 languages, Africa follows closely with 2,138.

There are about 1,300 languages in the Pacific, and 1,064 in South and North America. Europe, despite its many nation-states, is at the bottom of the pack with just 286.

2. These are some of the languages with the most native speakers 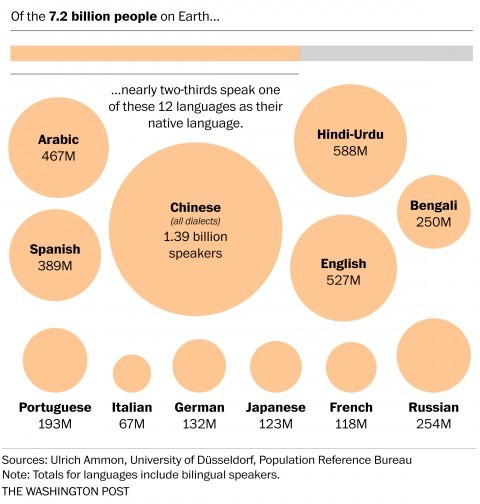 The numbers are fascinating because they reflect the fact that two-thirds of the world’s population share only 12 native languages. Those numbers were recently published by the University of Düsseldorf’s Ulrich Ammon, who conducted a 15-year-long study.