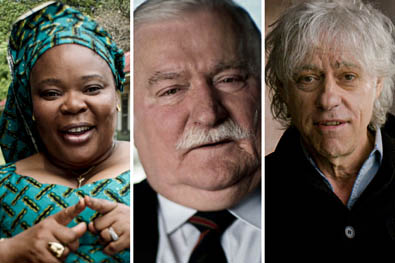 They deposed a dictator, helped defeat Communism and started a movement to end famine. In this Op-Docs series, the Liberian activist Leymah Gbowee, the former Polish president Lech Walesa and the rocker Bob Geldof talk about their campaigns for peace.

Don’t we all have pictures in our heads about Nobel Peace Prize winners — who they might be, where they might come from? (This year’s Peace Prize winner will be announced on Friday.) For me, the subjects of these three films — the winners Leymah Gbowee and Lech Walesa, and the nominee Bob Geldof — challenged all such preconceptions. All three came from surprising, unexpected places.

Leymah Gbowee wanted to be a doctor. Instead, she ended up as an unwed mother, a refugee from blood-soaked Liberia, and doing the impossible. Like a modern-day Joan of Arc, she answered a vision, a call, and changed the world. Her efforts in the 2000s helped force the dictator Charles G. Taylor out of power and into the International Criminal Court at The Hague. (As her country has recently been ravaged by Ebola, she has warned that the epidemic threatens to unravel a decade of peace and has asked for an enhanced response.)