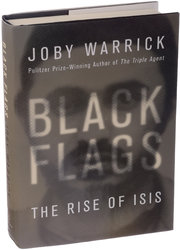 In the last month, terror attacks that left 130 dead in Paris and 43 dead in Beirut and took down a Russian airliner with 224 people aboard have made the entire world horribly aware that the Islamic State not only seeks to establish a caliphate in Syria and Iraq, but also is beginning to export its monstrous savagery abroad. Although the Islamic State has been in the headlines for only two years, and its metastasis has been alarmingly swift, the seeds of the group — in its many incarnations — were planted many years ago, as Joby Warrick’s gripping new book, “Black Flags,” makes clear.

Mr. Warrick, a reporter for The Washington Post and the author of the 2011 best seller “The Triple Agent,” has a gift for constructing narratives with a novelistic energy and detail, and in this volume, he creates the most revealing portrait yet laid out in a book of Abu Musab Al-Zarqawi, the founding father of the organization that would become the Islamic State (also known as ISIS or ISIL).

Although this book owes some debts to Jean-Charles Brisard’s 2005 book, “Zarqawi: The New Face of Al Qaeda,” Mr. Warrick places that material in context with recent developments and uses his own copious sources within the United States and Jordanian intelligence to flesh out Mr. Zarqawi’s story and the crucial role that American missteps and misjudgments would play in fueling his rise and the advance of the Islamic State.