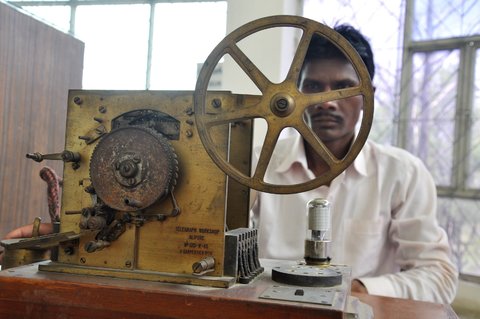 An employee of the National Telecom Museum in Bhopal, Madhya Pradesh, sitting behind an 1871 model of a telegraphic code machine invented by French engineer Emile Baudot.

On Saturday afternoon, Vikrant Deshpande, a 32-year-old Indian Air Force pilot, drove with his wife to the Central Telegram Office in New Delhi. The newly married couple gazed at a sign in the Telegram Office lobby that read, “Standard Phrases for Greeting Telegrams.”

Inside the Central Telegram Office, the air was humid with apprehension and despair. A vast majority of the telegram service workers are in their 50s, many a few years from retirement. And they are nervous about their jobs in the post-telegram world.

R.K. Goyal, a 58-year-old telegraph operator, is retiring in 2015. On the afternoon of June 12, when he was busy transcribing government wires, a circular came from Bharat Sanchar Nigam Limited, a state-owned telecommunications company, that announced the end of countrywide telegram operations. It didn’t surprise him. He’d been hearing about it for the last three months.

“Technically they are not firing us,” Mr. Goyal said. “We will be asked to do a different kind of work in some other department, but we all will be obsolete.”… Read more