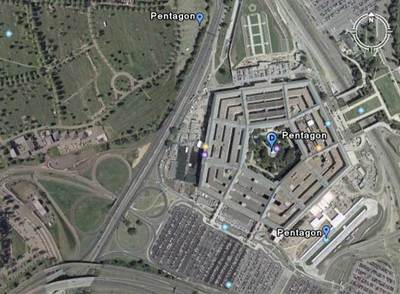 The Pentagon from the air: Google Maps

If Congress and Obama can’t reach a deal to avoid sequestration, then the country would see budget cuts of $1.2 trillion through 2021. Defense Secretary Leon Panetta has said that the defense cuts would be a “disaster.” But if you look at this graphs, published by the Washington Post on Feb 19, 2013, the blow isn’t as bad as the military has faced in the past. Even if the sequestration was implemented, the drop in spending, as the Center for Strategic and International Affairs has concluded in its research on the subject,  would be less than the military experienced after the Korean, Vietnam or Cold wars.

Never mind what history says. The Pentagon has done all it can to avoid the scissors.  Ernesto Landoño and Elisa Lei put it this way in their analysis for the Washington Post on Feb 21:

The $46 billion dent to the Pentagon’s fiscal 2013 budget, long considered by the brass as nothing more than a political pawn, has taken on an air of inevitability, forcing commanders across the military to plan for painful reductions and argue that American lives and livelihoods are hanging in the balance.

According to Kimberly Amadeo (About.com Guide), Defense (DoD) represents a little over two thirds of the total, $525.4 billion, a $5 billion  reduction from the amount approved in the FY 2012 budget. If there were no need for defense spending, the budget deficit would be reduced to a mere $50 billion. However, the DoD budget is projected to increase to $533.6 billion for FY 2014.(Source: U.S. Office of Management and Budget, FY 2013 Budget Summary Table S-12)

The Defense Department achieves savings by focusing on state-of-the-art equipment, such as unmanned surveillance aircraft and upgraded tactical vehicles. It terminated what it called «unnecessary and lower-priority programs,» including the C-27 airlift aircraft and a new weather satellite. DoD also reduced spending on the Joint Strike Fighter. It will achieve further savings by consolidating data centers.

On Feb 19, 2013 Bloomberg Visual Data published a graphic –Defense Budget at Center of Spending War– comparing U.S. Defense spending with the military expenditures of the other major spenders.

In his Feb. 12, 2013 State of the Union address, President Barack Obama declared the U.S. doesn’t have to mantain tens of thousands of troops to occupy nations or to respond to the evolving threat from new extremists. Cyber-attacks are the “rapidly growing threat,” he said.

Nevertheless, as Gopal Rutnam explains in his research for Bloomberg on the subject,  the defense budget projected for the next fiscal year contains hundreds of billions of dollars for new generations of aircraft carriers and stealth fighters, tanks that even the Army says it doesn’t need and combat vehicles too heavy to maneuver in desert sands or cross most bridges in Asia, Africa or the Middle East.

“There’s a fundamental need to have a conversation about what kind of military we need to have and what we should expect it to do,” Andrew Bacevich, a West Point graduate and former Army colonel who now teaches at Boston University, said in an interview.

In the absence of such a conversation, the Pentagon faces the prospect of $500 billion in automatic cuts over the next decade, beginning March 1, with no consensus on what to trim. Instead, the budget is driven largely by champions of existing programs in Congress, the defense industry and the uniformed services. As a result, predicts Bacevich: “The behemoth of an entity called the Pentagon is not going to shrink.”

The cuts are especially painful for small companies, those who don’t have multiyear contracts with the Pentagon, but they are harming also the most important ones and could change in a very negative way, if they are maintained or increased, the biggest companies’ portfolios in the decade ahead.

Pentagon spending cuts, should they remain in force over a decade, would mean “changes in the portfolios of Lockheed, Northrop Grumman, General Dynamics and Boeing,” the biggest U.S. defense contractors, Byron Callan, a defense analyst in Washington at Capital Alpha Partners LLC, said in an interview. “Five years from now they’ll look different.”

Information technology units may be spun off and then consolidated, while slow-growing operations such as shipbuilding and armored-vehicle manufacturing may end up in the hands of private equity investors, Callan said.

Under the headline Ten Giant Weapons in the Pentagon’s Shrinking Budget,  Emma Fidel explained in 13 slides on Feb 19, 2913  in Bloomberg the impact of the cuts in key defense projects.

Some are over budget. Some are behind schedule. Some just don’t work. The U.S. military’s top weapons programs are among the world’s most high-tech and costliest systems, with estimated acquisition costs totaling $1.6 trillion through fiscal year 2013. Defense made up about 20 percent of all U.S. spending in 2012, according to the Congressional Budget Office. Congress approaches a March 1 deadline to avert spending cuts of $1.2 trillion over nine years, half from defense. Here, in ascending order by price, are 10 of the military’s most expensive weapons programs that could draw fire.

Fidel’s presentation is the first of a series of four articles on the subject.