Fighting for the Soul of Ukraine

“Revolution!” This is what they are shouting in Kiev. Ever since November 21 tens of thousands have been on the streets of the capital of Ukraine, defying the police and bans on demonstrations. On…

KIEV, Feb 21 2014 (IPS) – As Ukraine’s capital experiences the worst violence in its post-Soviet history, some protestors are warning that the festering discontent with the regime which led to the current crisis is unlikely to disappear overnight even if a solution to the current impasse is found.

When the anti-government protests began in November they were ostensibly a mass reaction to the decision by President Viktor Yanukovych to turn his back on the first stage of EU accession.

“People having had enough of Yanukovych, the corruption and the economic situation have all aroused the anger that has brought people onto the streets.» — Masha Kostishyn, an unemployed economist

But they soon became as much an expression of distaste and frustration with the ruling regime as any single political decision.

“This all started with the abrupt decision not to sign the agreement with the EU, but there was more to it than that. Everyone was completely fed up with Yanukovych’s regime,” Valerii Drotenko, a 45-year-old protestor told IPS.

Since coming to power in 2010, civil liberties have been eroded, political opponents have faced severe repression, and the independence and integrity of law enforcement agencies has all but disappeared, local and international rights groups say.

At the same time the perception of massive corruption, cronyism and nepotism within the regime has grown among the general population. Critics have pointed to Yanukovych concentrating political power in his own office and at the same time building his own family into a wealthy and socially dominant force… MORE

Resources on the Crisis in Ukraine

The Foreign Policy Initiative (FPI) is closely monitoring the events in Ukraine, and believes that the following resources will be helpful as policymakers and lawmakers craft their response.

Gosh I’m glad I was right. History in the making at Ukraine’s parliament tonight. Thx @andersostlund for a brief

Top news: Gunfire rang out in central Kiev on Thursday, bringing the death toll since Tuesday to more than 50 and ending a fragile truce declared yesterday by President Viktor Yanukovich. The details of how the fighting started remain hazy, but riot policemen were shown on television firing automatic rifles at anti-government protesters. A Reuters photographer later reported seeing the bodies of 21 civilians in Independence Square. According to a medical worker at the scene, many of the demonstrators died instantly. «They were shot directly to their hearts, their brain and to their neck,» she told CNN.

In a statement issued by the president’s office, Yanukovich blamed demonstrators for reigniting the violence: «The opposition used the negotiation period to buy time, to mobilize and get weapons to protesters.»

Yesterday’s brief truce came after the United States announced visa bans for 20 members of the Ukrainian government and threatened further sanctions. «All of us are deeply disturbed,» said U.S. Secretary of State John Kerry. «We are talking about the possibility of sanctions or other steps with our friends in Europe and elsewhere in order to try to create the environment for compromise.»

Ukraine, that crackdown is going to cost you. FP’s Jamila Trindle: «After weeks of disagreement between American and European leaders over how to respond to escalating violence in Ukraine, the mounting bloodshed and chaos in the streets of Kiev seems to have finally brought about a hard-won consensus. United States and European Union officials made clear Wednesday that they would be prepared to move ahead with targeted sanctions against the government of embattled Ukrainian President Viktor Yanukovych if his security forces continued using live ammunition against the protesters clogging the streets of most of the country’s major cities. Yanukovych called for a ‘truce’ Wednesday and promised to negotiate with opposition leaders, but it’s not clear if, or when, the talks will lead to a deal.» More here. \

Top news: The stand-off in Ukraine’s capital of Kiev lurched toward intensified violence overnight as police waged a pitched battle against protesters, who have once more lit barricades on fire in an effort to keep police out of the square that has served as the protest movement’s home base. But that has failed to prevent an uptick in casualties: At least 25 people have been killed in the latest round of clashes, nine of them police. An additional 241 have been injured.

«The opposition leaders have disregarded the principle of democracy according to which one obtains power not on the streets or maidans — but through elections,» Ukrainian President Viktor Yanukovych said in a statement Wednesday, referring to the Kiev square held by protesters, which is better known as the Maidan. «They have crossed the line by calling for people to take up arms,» he added.

The crackdown in Kiev has drawn a critical international response. European Union foreign ministers will meet on Thursday and are expected to put in place sanctions on those responsible for the «repression» in Kiev. U.S. Vice President Joe Biden called Yanukovych to express his «grave concern» over the protest crackdown and «made clear that the United States condemns violence by any side, but that the government bears special responsibility to de-escalate the situation,» according to a White House statement.

Russia, however, stood by her embattled ally. «In the president’s view, all responsibility for what is happening in Ukraine rests with the extremists,» Dmitri S. Peskov, a spokesman for Russian President Vladimir Putin, told reporters.

Live streams from Maidan – the main square were Ukrainians have been protesting since November 2013 – showed capital city Kyiv ablaze on the evening of February 18, 2014. Fierce clashes between police and protesters around the main square continued through the night. On February 19, the Kyiv Post reported that at least 25 people are dead and more than 1,000 are injured.

Protests in Ukraine escalated to a deadly stand-off between hundreds of thousands of citizens and government forces on February 18. Roads to the city were blocked by authorities, and the metro in Kyiv was stopped. The main opposition TV channel reported being taken off air… MORE

Ukraine’s embattled president Viktor Yanukovich claimed on Friday to have reached a compromise deal to end the country’s violent political crisis – but EU ministers immediately raised questions and it was unclear that anti-government protesters would accept it.The announcement followed a massacre in Kiev on Thursday in which as many as 70 Ukrainians were killed as unidentified snipers fired on protesters in the capital’scentral square.

The bloodbath brought mounting international pressure on Mr Yanukovich to end the crisis, and he held talks late into the night with a trio of EU foreign ministers from Poland, Germany and France, as well as a representative from Moscow.

Pressure was also intensifying on the country’s teetering economy as Standard & Poor’s, the rating agency, warned bluntly on Friday that Ukraine “will default” without significant improvements in the country’s political situation “which we do not anticipate”. S&P lowered its rating for Ukraine by one notch to CCC, with a negative outlook…  MORE

On  this Story and Topic in The Financial Times 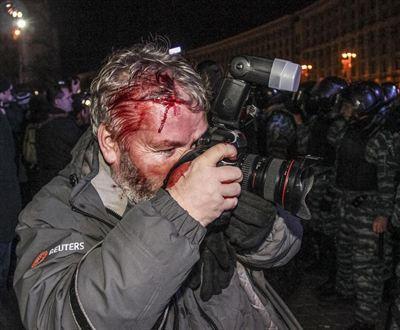 Media in Ukraine: A Domain of the State, the Oligarchs, or the Public?

For those inside and outside of Ukraine and Venezuela, social media is the only media that matters

AP Reporter: ‘I Saw Bodies Lying On The Pavement’

KIEV, Ukraine (AP) — I heard a strange clanking sound this morning in my hotel room overlooking the Ukrainian capital’s main square. I carefully opened the balcony door and looked down. A bullet from…