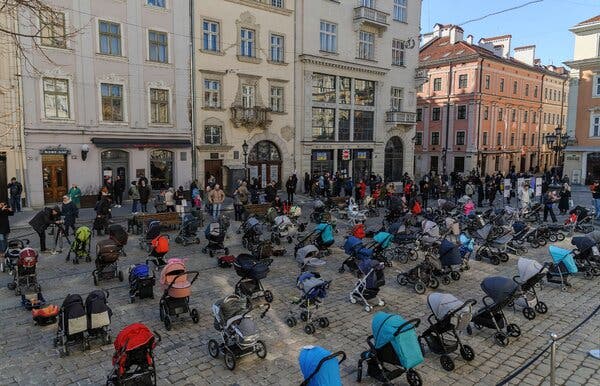 Empty strollers were placed in Lviv, Ukraine, last week to represent the children who had been killed during Russia’s invasion.Credit…Mykola Tys/EPA, via Shutterstock v @nytimes

KRAKOW, Poland — A peace activist in the western Ukrainian city of Lviv rolled 109 baby strollers into a square last week to represent the children who had been killed in the war with Russia. Hours later, the image was available to millions on their phones.

A little girl sheltering in a basement in Kyiv sang a haunting rendition of “Let it Go,” from the movie “Frozen,” and the clip sped around the world. A cellist performed a somber Bach suite on a street in Kharkiv, with debris and the windowless facade of a damaged building serving as his backdrop, and thousands watched.

These heart-wrenching glimpses of life in Ukraine since the Russian invasion have become powerful ammunition in an information war playing out on social media. For some, the messaging has become a crucial battleground complementing the Ukrainian military’s performance on the physical front lines, as images and information ripple out on Instagram, Facebook, Telegram and TikTok.

“We are experiencing the war very viscerally through social media feeds,” said Emerson Brooking, a resident senior fellow at the Atlantic Council, a Washington-based international-affairs think tank. “The transformation of Ukraine into a nation at war is just stark. And so it has especially resonated with Western audiences.”

Social media has long been a place where activists organize and share news, as well as a place to recruit fighters or seed disinformation. But in this battle, the proliferation of pictures showing the human toll of the war has helped Ukraine project an image of a country of stalwart survivors with the moral high ground, while casting Russia as a merciless aggressor — an impression reinforced by global condemnation and sanctions.

Mr. Brooking said that Ukraine had an additional advantage because Russia had not engaged in the same level of disinformation as it has in the past, in part because the government in Moscow has denied the extent of the war.

Those efforts have only deepened Anastasiya Magerramova’s determination to show the world the devastation in Ukraine. Ms. Magerramova, 27, press secretary for the Okhmatdyt pediatric hospital in Kyiv, said she feels that she is fighting her own battle — a struggle for truth alongside the conflict among soldiers — as her compatriots take up arms.