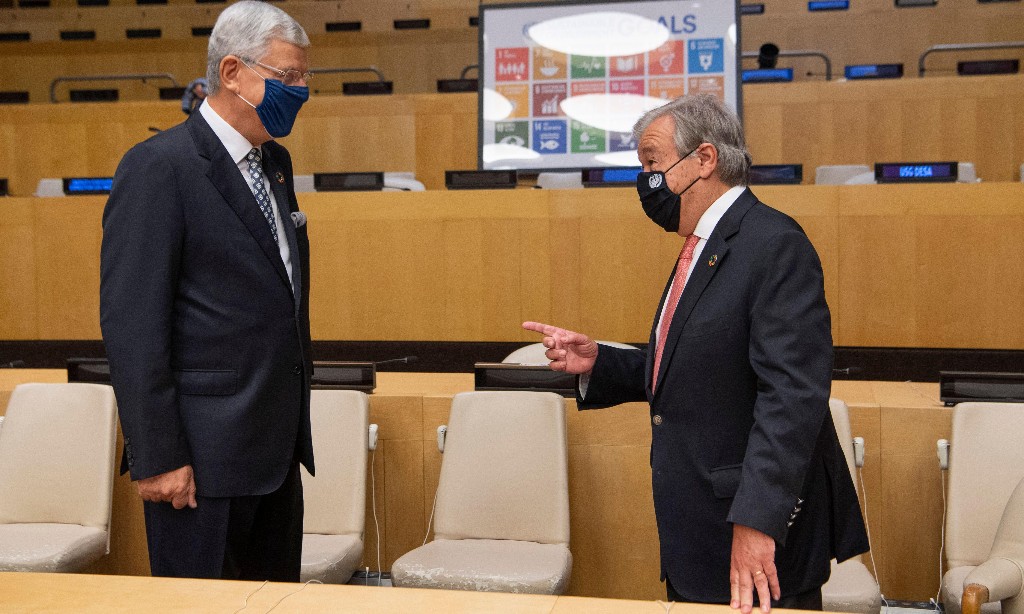 Diplomats and foreign ministers are slowly emerging from their Covid-induced hibernation, but the 75th United Nations general assembly – supposedly a display of the world’s connectedness – will largely be an exercise in remote Zoom diplomacy.

World leaders will not be at the podium in New York delivering set-piece speeches, but instead will be sending pre-recorded messages from behind their flag-festooned office desks in their capitals. Only national diplomats already in New York will be present in the UN chamber, probably about one per country.

The US told UN member states that anyone who wanted to come had to self-quarantine for 14 days upon arriving in New York. As a result it will be an general assembly like no other. The behind-the-scenes bilaterals, side events and chance encounters that turn the annual meeting into a diplomats’ playground will be absent.

There will be no repetition of the drama of last year, for instance, when Emmanuel Macron shuttled through New York hotel suites late at night in an attempt to persuade Donald Trump and the Iranian president, Hassan Rouhani, to bury their differences over the Iran nuclear deal.

The UN secretary general, António Guterres, took the decision to close the UN campus on the East River early in March, even before Broadway or the New York museums had shut their doors. “The UN politically could not afford to become a hotspot within a hotspot that New York was becoming,” said Stéphane Dujarric, the spokesperson for Guterres.

Like many organisations, the UN was put through a crash course in remote working. Many diplomats say they have felt like fish out of water over the past few months, rattling around empty embassies, reminding colleagues to unmute on video calls.

Virtual ministerial country visits to Yemen are hardly a substitute for the reality, while cultural events, such as tango lessons or wine tasting, represent an online challenge. “The way we communicate constantly changes with technology from the telex and diplomatic pouch to the mobile phone. But this is a face-to-face business,” one EU diplomat in London said.

Hreinn Pálsson, the deputy chief at Iceland’s UN mission, explained the pitfalls of zoom diplomacy during a recent Zoom seminar. “The trouble is everything is on the record,” he said. “We do not write reports back home about the political situation in the US. What we do is provide the background, and you get the background from private conversation.

There is little celebration as leaders stay away

AT THIS TIME of year New York City is normally gridlocked. World leaders and their delegations, as well as hordes of consultants and folk from non-governmental organisations, flood into town for the United Nations General Assembly (UNGA). This year’s gathering was meant to be special, marking the 75th anniversary of the UN’s founding in 1945. But the constraints of covid-19 have ensured that the UNGA of 2020 will stand out in a different way: as a general non-assembly.

World leaders are not travelling to New York. Instead, they will deliver pre-recorded video messages to the session’s general debate that starts on September 22nd. Until recently it seemed that President Donald Trump might at least be an exception, coming to the UN to speak in person. But last week his chief of staff confirmed that he would stay away after all.

The formal commemoration on September 21st of the UN’s 75th anniversary will thus be a subdued affair. Even before covid-19 disrupted arrangements, it was planned to be low-key. The mood is strikingly different from the euphoria that greeted the organisation’s birth at the end of the second world war.

At the closing session of the conference in San Francisco that hammered out the UN’s charter, President Harry Truman praised the 50 founding countries for setting aside their differences “in one unshakable unity of determination—to find a way to end wars.” Since then the UN has expanded to 193 members, sprouted numerous specialised agencies and a big bureaucracy, championed efforts to save the planet from climate change (brokering the Paris Agreement) and to save humanity from poverty (producing Sustainable Development Goals), and moved into peacekeeping in a big way. Over the years more than 1m people have taken part in more than 70 UN peacekeeping missions. 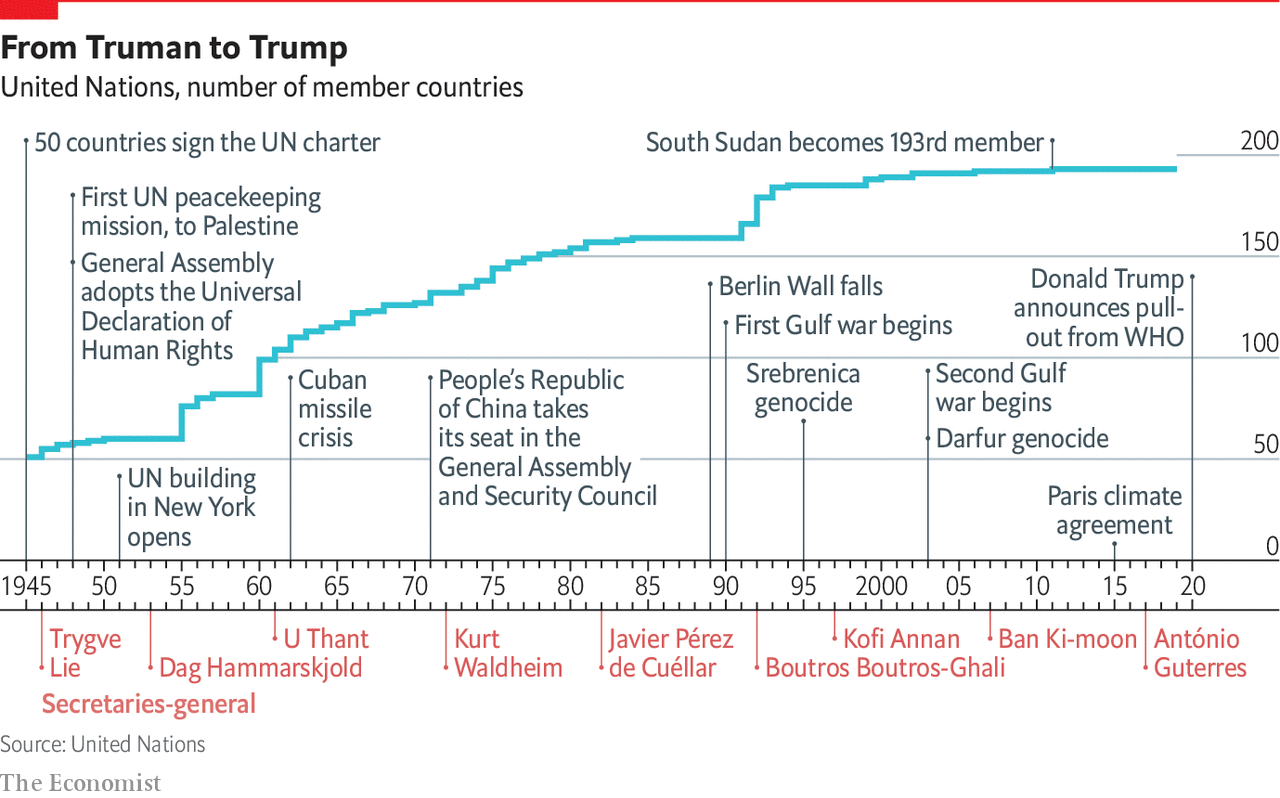 Yet, given the troubled state of the world, this was not deemed to be a time for a boastful birthday bash. “We are not here to celebrate,” says the UN’s anniversary declaration, due to be approved by the General Assembly on September 21st. 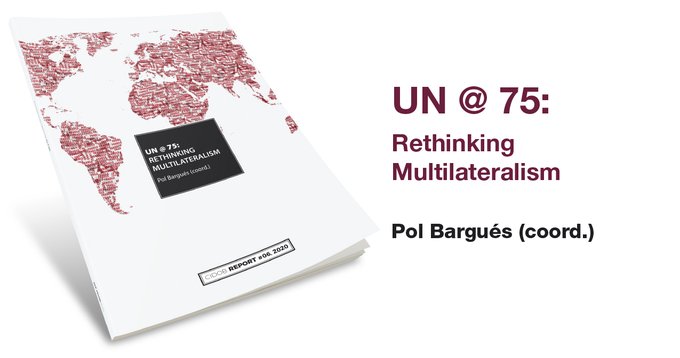 United Nations turns 75 today. How to survive to Trump and the pandemic? Check this report –Rethinking multilaeralism (108 pages)- by @CidobBarcelona for diagnose and proposals. #UNGA.

At the U.N., a General Assembly Like No Other

As world leaders meet for the 75th United Nations General Assembly this week, the gatherings are virtual, but the challenges all too real

Taking a moment to mark a milestone.

The General Assembly will begin its annual speeches by world leaders on Tuesday, but on Monday it held a separate and largely virtual gathering to commemorate the passage of the United Nations into its fourth quarter-century.

In the cavernous hall at the headquarters of the organization, each delegation was limited to one or two envoys spaced far apart and wearing masks. The new president of the General Assembly, Volkan Bozkir of Turkey, opened the commemoration by declaring the organization’s commitment to multilateralism, a tenet of the United Nations Charter that obliges nations large and small to work together.

“Without your continued commitment to multilateralism, we would not be sitting here today,” he said.

The secretary-general, António Guterres, told the gathering that the avoidance of a third world war was a “great achievement of which member states can be proud — and which we must all strive to preserve.”

The delegates later unanimously adopted a resolution commemorating the 75th anniversary of the United Nations, “born out of the horrors of the Second World War” in 1945. “There is no other global organization with the legitimacy, convening power and normative impact of the United Nations,” it stated.

What may have once been conceived as a simple celebration now had a more poignant, even elegiac air.

“The U.N. is marking its 75th anniversary at a time of great disruption for the world, compounded by an unprecedented global health crisis with severe economic and social impacts,” the organization says on a website dedicated to the milestone. «Will we emerge stronger and better equipped to work together? Or will distrust and isolation grow further?»

The pandemic has not only illustrated worrisome tendencies among many countries to turn inward but may also be worsening them.

PARIS — This week’s virtual United Nations General Assembly could be a metaphor for the decline of diplomacy and of efforts to maintain a rules-based international order instead of the law of the jungle.

Due to the COVID-19 pandemic, world leaders are delivering a series of video monologues without being able to meet in New York for the customary pull-asides and private talks in which global disputes are often thrashed out, and common challenges such as climate change, disease, poverty and development addressed.

On its 75th anniversary, the U.N. cuts an increasingly beleaguered figure, eerily reminiscent of the League of Nations in the 1930s. In the age of megaphone diplomacy by tweet, jaw-jaw — to misparaphrase Churchill — is no longer better than war-war.

The Security Council is once again deadlocked by disputes and distrust among the great powers: the United States, China and Russia.

Arms-control treaties that helped keep the Cold War cold by slowing the spread of atomic weapons and instilling a modicum of trust among the superpowers have been violated or torn up. The few safety limits that are still intact may soon be left to expire.

There is no single culprit for the current waning of the “universal” world order that many emerging nations contend was fashioned by the West in its own interest in 1945, and again after the collapse of the Soviet Union in 1991.

The many disruptive factors include China’s increasingly assertive rise, highlighted by its militarization of the South China Sea; Russia’s revisionist drive to carve out a sphere of influence, epitomized by its seizure and annexation of Crimea from Ukraine; and America’s refusal under President Donald Trump to honor agreements on Iran, climate change or trade to which his predecessors committed the United States. The UN General Assembly hosts a much-watched debate of world leaders each year but has struggled to make its work more substantive. For the first time in the assembly’s seventy-five-year history, leaders of member states will not gather in person due to the coronavirus pandemic. (CFR background, Aug 25, 2020)