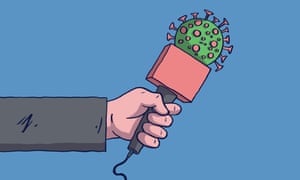 The government was late to wake up to the fact that so much of the population was receiving news about the crisis from wildly unreliable sources. There were immediate calls for a clamp-down. Not social media, but astrology. Not Covid-19, but the early days of the Second World War, as it became alarmingly apparent how much the British people relied on newspaper soothsayers such as Edward Lyndoe of the People and RH Naylor of the Sunday Express for their “news”.

Naylor’s advice for his readers as they anticipated the Blitz depended on their star sign: he counselled people born in January and November, for example, to take their chances in the open rather than underground shelters. The Home Office (Intelligence Branch) began an investigation and found that 40% of the population had some belief or interest in astrology and that a huge number of people were influenced enough to change their behaviour during air raids. The financial secretary to the Treasury called for “strong action to put a stop to this form of journalism”.

Today, we have social media and Fox News, the latter much more culpable than star-gazers since it presents itself as a reliable news channel. While the 89-year-old Rupert Murdoch reportedly cocooned himself in the safety of his eight-acre California vineyard, his Fox News toilers faithfully trumpeted the alarmingly erratic views of the man described by the writer Fintan O’Toole as “America’s vector in chief”: the president of the United States.