The United Nations’ World Food Programme (WFP) won the 2020 Nobel Peace Prize. The UN agency is the largest humanitarian organization in the world that addresses hunger and promotes food security. «With this award, we wish to turn the world’s eyes to the millions of people who face hunger and food poverty,» Berit Reiss-Andersen, chair of the committee, announced in Oslo.

In 2019, the WFP provided assistance to close to 100 million people in 88 countries who are the victims of acute food insecurity and hunger. The Rome-based WFP has also been instrumental in working to fight increased hunger caused by the coronavirus pandemic, Reiss-Andersen noted, adding that food insecurity is also a driving cause of conflict in the world.

Though other organizations have won the peace prize — most recently the International Campaign to Abolish Nuclear Weapons, in 2017 — the World Food Program is particularly sprawling. The organization has 17,000 staff worldwide, works in some 80 countries, and says it has more than 20 ships, 90 planes, and 5,600 trucks on the move on any given day.

The World Food Program relies on voluntary funding, but it appears to have escaped Trump’s financial backlash. The White House has not targeted for U.S. funding reductions such as those threatened for other U.N. agencies such as the World Health Organization. The United States contributed $2 billion to WFP in 2015, the largest amount by far of any nation.

Last year, the U.S. provided nearly $3.4 billion, again the highest figure. After the United States, Germany and Britain are the next-largest contributors, both at less than $1 billion. 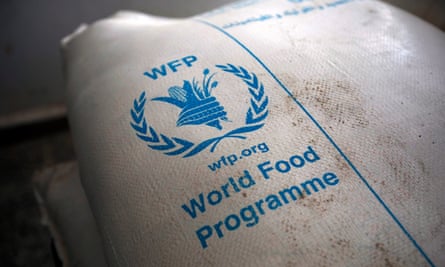 The World Food Programme (WFP) has won the 2020 Nobel peace prize for its efforts to combat hunger and to improve conditions for peace in conflict areas.

The chairwoman of the Norwegian Nobel committee, Berit Reiss-Andersen, revealed the 2020 laureate at the Nobel Institute in Oslo, where coronavirus restrictions drastically reduced the usual throng of reporters in attendance.

Reiss-Andersen said the committee gave the award to the WFP because it wanted to “turn the eyes of the world to the millions of people who suffer from or face the threat of hunger”. Hunger, she said, was used as a “weapon of war and conflict”.

The award was also a call to the international community to fund the UN agency adequately and to ensure people were not starving, she said. She said the WFP would have been a worthy recipient of the prize without the coronavirus pandemic. But the virus had strengthened the reasons for giving it to the WFP, including the need for “multilateralism” in a time of global crisis.

“It’s a very important UN organisation. The UN plays a key role in upholding human rights,” she said, adding: “Food is one of our most basic needs.”